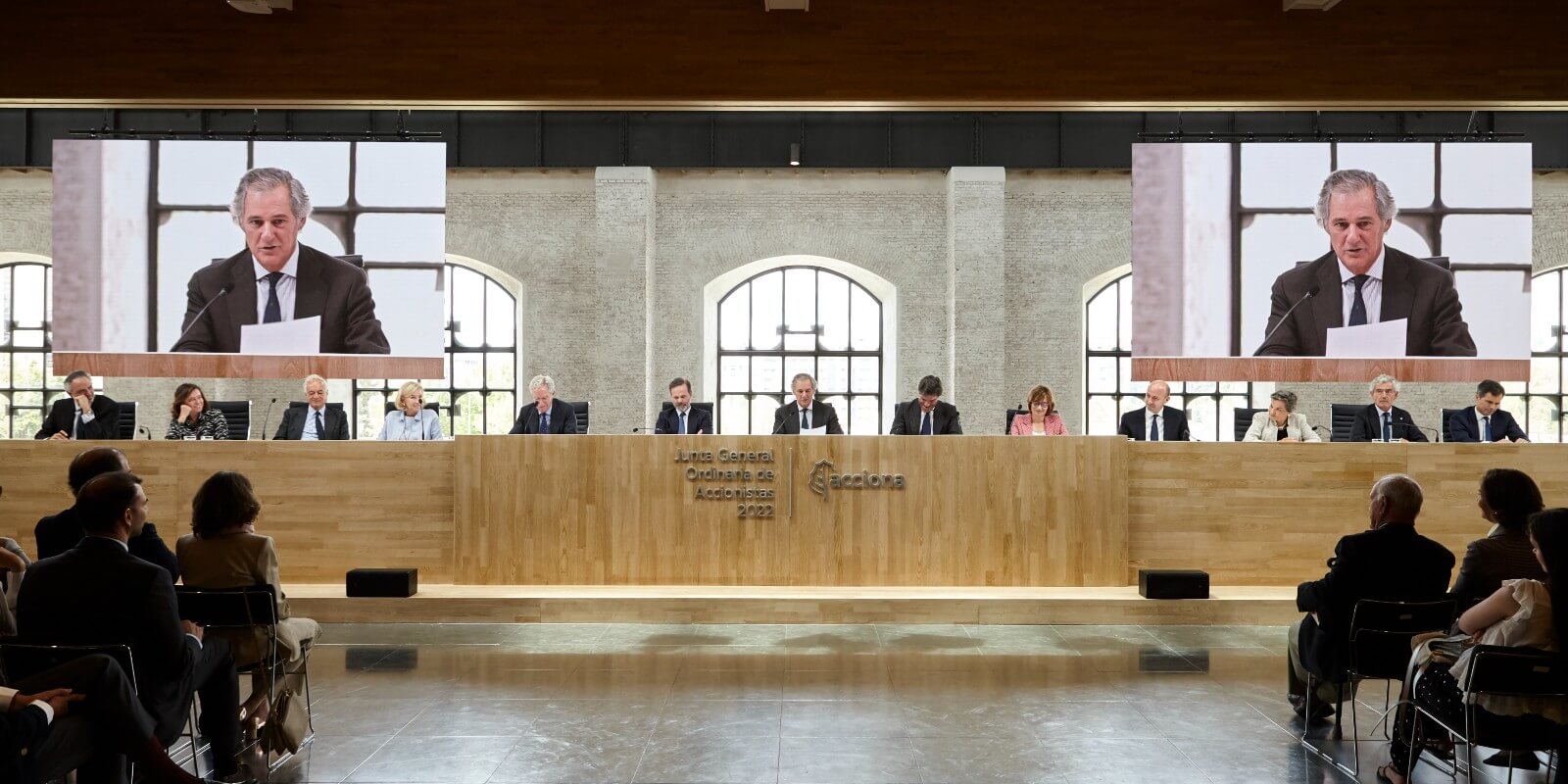 In his speech, the ACCIONA Chairman highlighted that "if Europe had accelerated its energy transition and reduced its dependence on fossil fuels, we would not have seen the energy prices we have suffered in recent months".

José Manuel Entrecanales stressed the need for companies to "invest hundreds of billions in regenerating our social, environmental and economic system". To this end, he called for stable regulatory environments and strong support from public administrations.

For ACCIONA's Chairman, in addition to rising prices, another risk of not tackling the energy transition as a matter of urgency is that "we are breaking emissions records year after year". He insisted that the climate crisis could have effects "incomparably more serious than those of any previous crises". "We are facing an unprecedented environmental catastrophe, and we don't seem to be even close to tackling it fast enough," said Entrecanales, who pointed out that ACCIONA has been warning of the dangers of climate change for almost two decades.

In his speech, José Manuel Entrecanales referred to the latest international crises, such as the economic crisis, the pandemic and war in Ukraine, which, in his opinion, has become a conflict "between two value systems: one that respects international law and one that believes might is right”.

ACCIONA’s Chairman expressed his condolences to the Ukrainian people as well as his support and solidarity with the company's workers in Ukraine. He expressed some confidence that there will eventually be a favorable solution to the conflict.

Addressing the AGM at the Ombú office complex developed by the company's real estate division, ACCIONA's Chairman underlined the company's significant fiscal contribution during 2021 in the countries where it operates. ACCIONA estimates its contribution to wealth creation for its stakeholders and society as a whole at €10 billion (+28%) - a social cash flow that represents the economic value created and distributed by the company. Of this amount, suppliers received €5.1 billion, employees earned €1.16 billion in wages and salaries, and tax authorities obtained €1.33 billion in 2021.

ACCIONA's Chairman also highlighted that the company has continued to reaffirm its leadership in sustainability and ESG criteria. ACCIONA, with 93% of its Capex aligned with the European Union’s taxonomy for sustainable activities, closed 2021 as the most sustainable electric utility in Spain and the second most sustainable one in the world, according to Standard & Poor’s, and was ranked for the sixth consecutive year as the 'greenest' power generation company in the world by Energy Intelligence.

In his speech, ACCIONA's Chairman reviewed the company's main business areas in a year of strong, across-the-board growth following a 2020 marked by the pandemic.

ACCIONA Energía, which accounts for 70% of Group EBITDA, hit a very significant milestone last year with its IPO on July 1st, 2021.  "Almost a year later, we can say that the IPO was a success for all shareholders, as reflected in ACCIONA's share price, which has risen 41% in the period, while ACCIONA Energía's share price has risen 39%," said José Manuel Entrecanales, who believes that ACCIONA Energía "is now one of the best renewable electricity companies in the world".

The Infrastructure division posted revenues of €4.87 billion in 2021 (+24%) and EBITDA of €323 million (+51%), despite tensions in the supply chain and the evolution of raw material prices.

In his speech, José Manuel Entrecanales highlighted the integration of Australian construction company Lend Lease Engineering as the most important event of the year in the Infrastructure area. This integration has made ACCIONA one of the three leading operators in Australia, a market with a national infrastructure pipeline of €150 billion over the next four years.  Australia is already ACCIONA's largest construction market, followed by Spain, Canada, Poland and Brazil.

ACCIONA's Chairman also underscored the performance of the water division, which topped €1 billion in revenues for the first time in its history and consolidated its global leadership in desalination. ACCIONA also delivered another record year in terms of backlog in 2021, with new projects worth €8.55 billion, bringing the total backlog to €18 billion.

José Manuel Entrecanales highlighted the delivery of 443 homes in the Real Estate division and the inauguration of two emblematic projects: the Ombú office complex and ACCIONA's new Mesena headquarters in Madrid.

MOBILITY ON THE RISE

In the area of electric mobility, ACCIONA's top executive pointed to the profound transformation the sector is about to undergo "with the consolidation and entry of new technologies that will change the way we move around the urban environment".

In this regard, ACCIONA’s Chairman reviewed the company's investments in several areas, such as a network of urban and interurban chargers in Spain, "with the intention of extending it to Europe and Latin America in the future".

He also recalled that Silence - Europe's leading manufacturer of electric motorbikes - is developing an urban electric vehicle "that we hope will be a game changer due to its removable and interchangeable battery as well as its extremely competitive price".  The Chairman said that "if difficulties in the supply of parts and logistical problems do not prevent it" this vehicle could "be on the market before the end of the year".

José Manuel Entrecanales also noted that ACCIONA continues to make progress on the targets of its Sustainability Master Plan 2020-2025, noting that in 2021, the percentage of women in management and executive positions had increased to 22% of the total, and that inclusion policies had increased the employment of people with disabilities to 4% of the workforce.

Shareholders approved the 2021 financial statements and sustainability report, as well as the distribution of a gross dividend of €4.1 per share, to be paid on July 7th.

The AGM endorsed the appointment of Maite Arango García-Urtiaga and Carlo Clavarino as Independent Directors, and the re-election of Sonia Dulá.