Climate change, one of the greatest challenges facing the world, requires cooperation between the public and private sectors. This coalition of 43 CEOs, including ACCIONA Chairman José Manuel Entrecanales, urges global leaders to act against climate change ahead of the United Nations Climate Change Conference in Paris (COP21) in December.

CEO Climate Leadership Group, created in January 2015 within the framework of the Global Economic Forum, believes the private sector has the responsibility to participate actively in efforts to reduce greenhouse gas emissions, limiting global warming to 2ºC and easing the transition to a low-carbon economy. These companies, from 20 different sectors, aim to drive actions to fight climate change with a view to offering specific solutions.

The signatory companies expect global leaders to reach an ambitious climate change agreement at COP21 in line with the Sustainable Development Goals, which will be approved in September.

In the fight against climate change, the CEO Climate Leadership Group has adopted a series of commitments:

The coalition of CEOs urges governments to accelerate their policies to create key alliances for the agreement expected to be reached at the COP21 in Paris: 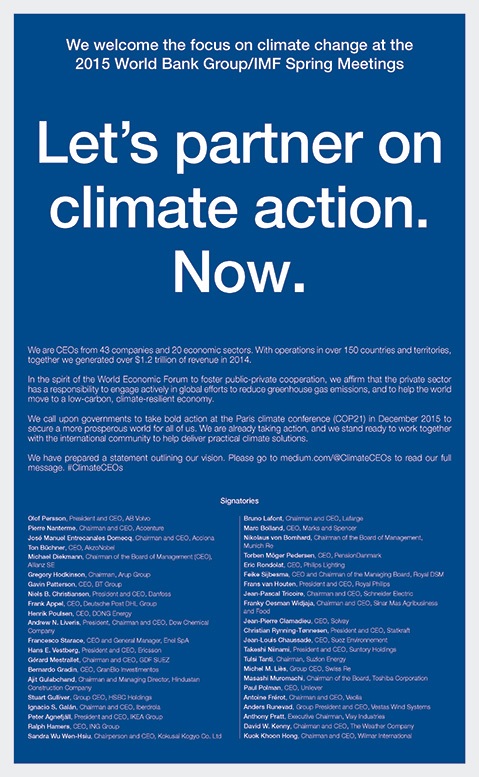