ACCIONA Energía has reached a technological milestone by integrating renewables into the electric power system, becoming the first company in the world to provide adjustment services by increasing the level of generation exclusively through wind power, a field reserved for conventional energy sources until recently.

The so-called “system adjustment services” in Spain - managed by the system operator, Red Eléctrica de España (REE), are aimed at ensuring a constant balance between energy generation and demand, for which the services are remunerated. This is essential for the correct functioning of the grid because electricity cannot be stored on a large scale, so all the energy consumed at a given time should be produced instantly. Any decoupling between supply and demand could, if not corrected in time, jeopardize the quality of electric power supplies.

Traditionally, system adjustment services for the national grid have been provided by conventional technologies such as thermal power stations or large-scale hydropower, given their technical characteristics. However, the technological evolution of renewable energies and the development of sophisticated prediction and management tools means they can also participate in this type of service.

This is reflected in the new regulation on the sector in Spain, specifically a Resolution dated 18 December 2015 by the Secretary of State for Energy that lays down the criteria for participation in system adjustment services. This has become legally possible since 10 February this year.

The participation is materialized through a system of adjustment markets (or operating markets) managed by the System Operator (REE) in which generators offer capacity or backup power (‘upward’ or ‘downward’, i.e. increasing or reducing the existing level) so that it can be used the next day by REE. The aim here is to correct any possible deviations between the energy programmed in the daily market and the real amount at a particular time (either through deviations between generation and consumption or due to situations of technical non-feasibility in the transmission network, called “technical restrictions”).

Last February 28 was a landmark day in the management of the Spanish electric power system and ACCIONA’s participation in it, as we were the first company to offer a range of adjustment services exclusively based on wind power capacity, requested by REE to provide a service to solve technical restrictions by feeding in additional generation capacity.

Instead of the usual situation, in which the system operator asks wind farms to limit their production when there is too much capacity in the grid, the opposite happened here. Technically, it is much more complex: in just a few minutes, a series of wind farms managed by ACCIONA increased their generation capacity by more than 150 megawatts (MW) in response to an instruction given by REE. 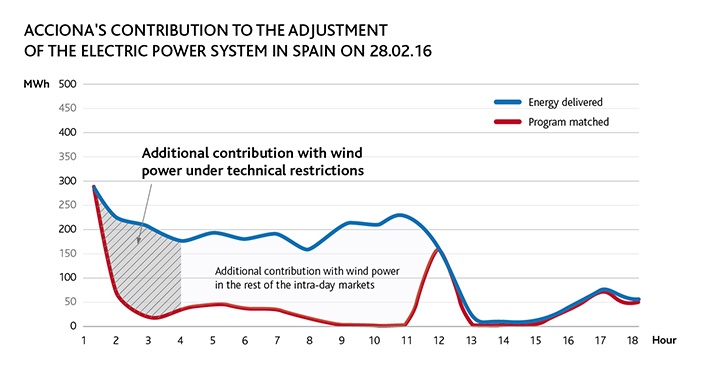 This has been possible thanks to the company’s technical capability, both in managing bids to the market for these adjustment services – carried out by Group subsidiary ACCIONA Green Energy Developments – and in the remote control of the operation by ACCIONA’s Renewable Energies Control Center (CECOER), in constant coordination with REE.

More than 1,000 MW in an accreditation process

ACCIONA is currently in a trial phase to be accredited by REE to provide the remainder of adjustment services – in addition to the technical restrictions one – i.e. ancillary services (secondary and tertiary control and deviation management. To illustrate this, in these tests the company has shown its ability to input 400 extra MW of wind power in less than 5 minutes, a great achievement in terms of the participation of wind power in the electric power system.

ACCIONA’s short-term objective is to have 1,000 MW of wind power capacity available to provide all the adjustment services. This figure is the maximum allowed by the legislation per “programming unit” (a set of installations that participate in the market together), and it is expected that this will become a reality next month. The wind power capacity in which ACCIONA participates in Spain is currently 4,735 MW (rated power). In future, the company plans to set up other programming units based on wind power and also use other renewable technologies apart from hydropower, a modality with which it has already participated in this kind of services to the system.

The participation of renewable energies in electric power system adjustment will increase the level of competition in the markets, which will have a positive effect on the electricity price paid by consumers. It also highlights the level of technological development reached by these technologies, meaning that their participation in the grid sometimes even exceeds 50% of all instant power generation in Spain at certain times, but without any reduction in the quality, stability and security of the system.