ACCIONA 100% EcoPowered returns to the Dakar

ACCIONA, a Spanish multi-national in infrastructure, water, services, and renewable energy, will return for the second consecutive year to participate in the Dakar rally; being once again the first and only vehicle at the starting line to consume not a single drop of fossil fuels.

The ACCIONA 100% EcoPowered's construction has meant continuous research and development work carried out by ACCIONA's R&D+i Department since its first design in 2012.

This year, this extreme challenge will be tackled again, with new assets incorporated; reducing its weight by 40%, incorporating up to eight new more powerful battery packs, 4x4 traction, and a sequential gearbox that allows for the electric engine's performance to be enriched. These enhancements have already demonstrated its effectiveness through its participation in the International Morocco Rally, where it was the first zero emissions vehicle to compete and complete a world rally calendar trial.

Through its participation, the company hopes to continue demonstrating the capabilities of clean energy as a true alternative to fossil fuels and the CO2 emissions that cause global warming.

Ariel Jatón will be at the wheel; a driver with extensive experience in the competitive world, having participated various times in the Dakar Rally. Ariel has been the Rally Cross Country's Argentine champion, having collaborated on the car's development and construction from day one. Joining him on-board as navigator will be Gastón Scazzuso, whose professional trajectory as an electrical engineer is applied to motorsports. 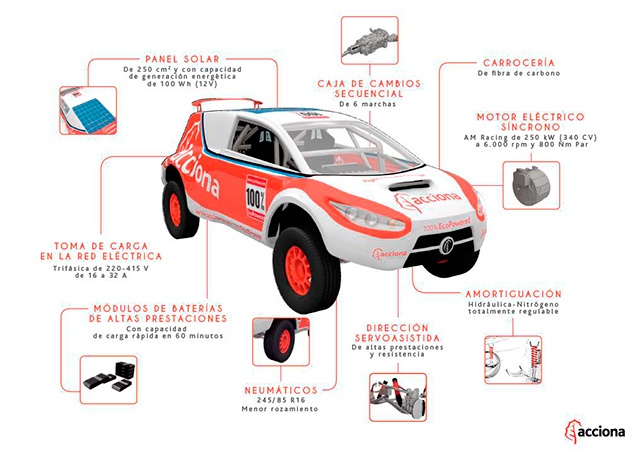 and our Social Networks: