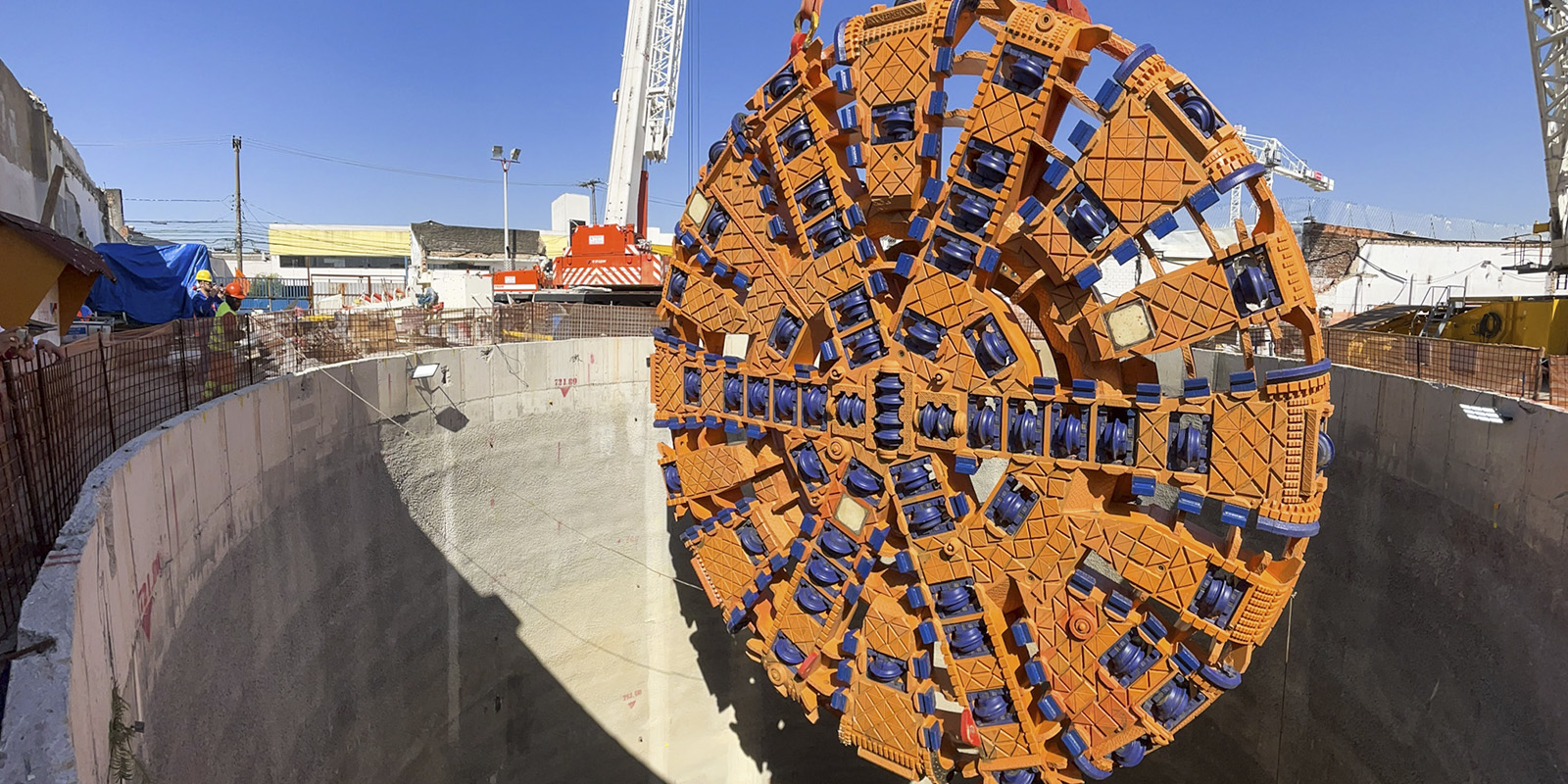 On September 1st the first cutting wheel was lowered into place for the tunnelling machine that will work northwards to dig Line 6 of the Sao Paulo Metro in Brazil. The manoeuvre was carried out in the borehole of Falla de Taxaquara, at the Tietê ventilation and emergency exit shaft.

According to Concesionaria Linha Universidade (Linha Uni), the joint venture responsible for the operation of the new line, in which ACCIONA holds a majority shareholding, the machine is expected to dig approximately 9 metres per day along a section around 5 kilometres long as far as the new Brasilândia station. The machine, nicknamed “Tatuzão”, will start work in October.

“We are about to restart the excavation work, which will require about 40 people per shift in one of the tunnelling machines”, says Linha Uni General Manager Nelson Bossolan.

The tunnelling machine weighs more than 2,000 tonnes and is 102 metres long, with an excavation diameter of 10.61 metres. It has all the equipment required... a cafeteria, a first-aid post, a conveyor belt to withdraw the excavated material and a control cabin and auxiliary equipment. The personnel working on the operation and logistics of the tunnelling machine include engineers, operatives, mechanical and electrical maintenance technicians, topographers, machine operators and safety and health officials, among others.

A boost to employment and diversity

The work on Line 6 of the Sao Paulo metro is currently creating around 9,000 direct and indirect jobs, 82% more than at the start of the year, when the figure stood at around 5,000.

Of the 4,000+ direct workers, 470 are women, and 300 of them work on the production line, in the quarries or as load handlers, truck drivers, laboratory assistants and production, engineering and technical assistants. They have all taken part in the “Women in Construction” programme organised by ACCIONA.

As well as contracting people for the project, the programme also offers official vocational training in cooperation with the Senai (National Service for Industrial Training) and the Escola da Movitação. The initiative, launched one year ago, is aimed at new graduates or technical personnel, but also at people without experience. The aim is to increase women's participation in operational areas and leadership of projects.

The work on Line 6 of the Sao Paulo Metro is currently taking place on 35 fronts, out of the 36 planned for the project. The new line will connect the stations of Brasilândia and Sao Joaquim Station (the latter in the centre of the city) with 15 other stations over a distance of 15 kilometres. Travelling times between these two points of the city, currently 90 minutes by bus, will be reduced to just 23 minutes, and the line will carry around 630,000 passengers per day.

The project is the biggest in the infrastructure sector currently under way in Latin America. It is a public-private partnership (PPP) between the Government of the State of Sao Paulo and Linha Universidade, in which ACCIONA holds a stake. The joint venture will run the line for 19 years, with the construction work being undertaken by ACCIONA.