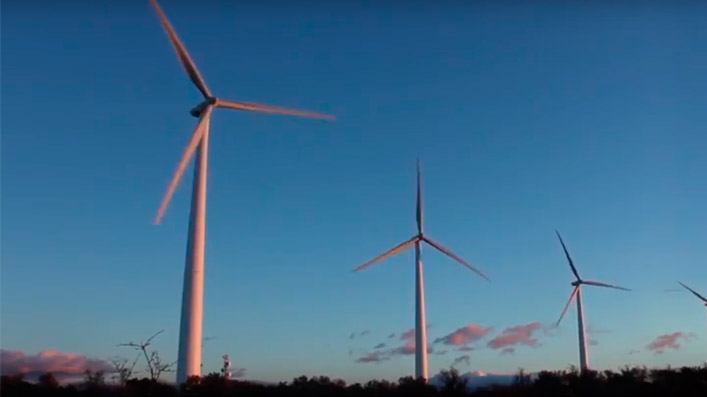 ACCIONA President José Manuel Entrecanales attended the inauguration ceremony of the Ventika wind power complex in Nuevo León, Mexico - the largest ever built by ACCIONA Energía for a client, with a capacity of 252 megawatts.

The inauguration was presided over by President Enrique Peña Nieto. Jerónimo Gerard, a member of ACCIONA’s Board of Directors, and Rafael Mateo, ACCIONA Energía CEO, also attended the event.

The Ventika project, located in the municipality of General Bravo, was built by ACCIONA under an EPC contract for a group of investors including Blackstone Energy Partners, Fisterra Energy and CEMEX. The consortium recently agreed to sell Ventika to Mexico’s IEnova, part of the US energy group Sempra.

With an estimated output of 1,000 GWh a year, the Ventika complex will cover the electricity demand of more than 630,000 homes.

ACCIONA Energía carried out the engineering, construction and supply of wind turbines for the complex and it will undertake its operation and maintenance for 20 years. ACCIONA’s execution of the project, completed ahead of schedule, received two CEMEX construction prizes for its innovative nature and excellence in construction.

The Ventika project consists of eighty-four AW116/3000 wind turbines of Nordex/ACCIONA Windpower technology. With a nominal capacity of 3 MW, each turbine has a 116-meter-diameter rotor installed on a 120-meter (hub height) concrete tower.

One innovative feature entailed using concrete towers for the first time in the Mexican wind power sector. The 1,848 sections of the wind turbine towers were assembled at a plant near Monterrey.

The project required more than 388 kilometers of underground cables to carry the generated power, and 54 kilometers of access tracks to the turbines.

An average of 420 people was employed during the construction of the complex, with peaks of up to 850 people at times of intense activity.

ACCIONA Energía is the leading wind power generator in Mexico, with 556.5 MW of wind power capacity in operation in Oaxaca. The company will build a 168-MW wind farm at Tamaulipas following the latest long-term energy tender, and has installed 302 MW for clients to date. The company has a portfolio of projects under development.

ACCIONA’s other business divisions also have an active presence in Mexico. ACCIONA Agua is part of a joint venture that is building the Atotonilco wastewater treatment plant – the biggest in the world – to service to 10.5 million people. ACCIONA Infrastructure has constructed more than 300,000 square meters in civil works projects, property developments and representative buildings, and ACCIONA Service has positioned itself as a vendor of key services for the biggest companies in the country, thanks to its 50-years-plus experience in the sector.