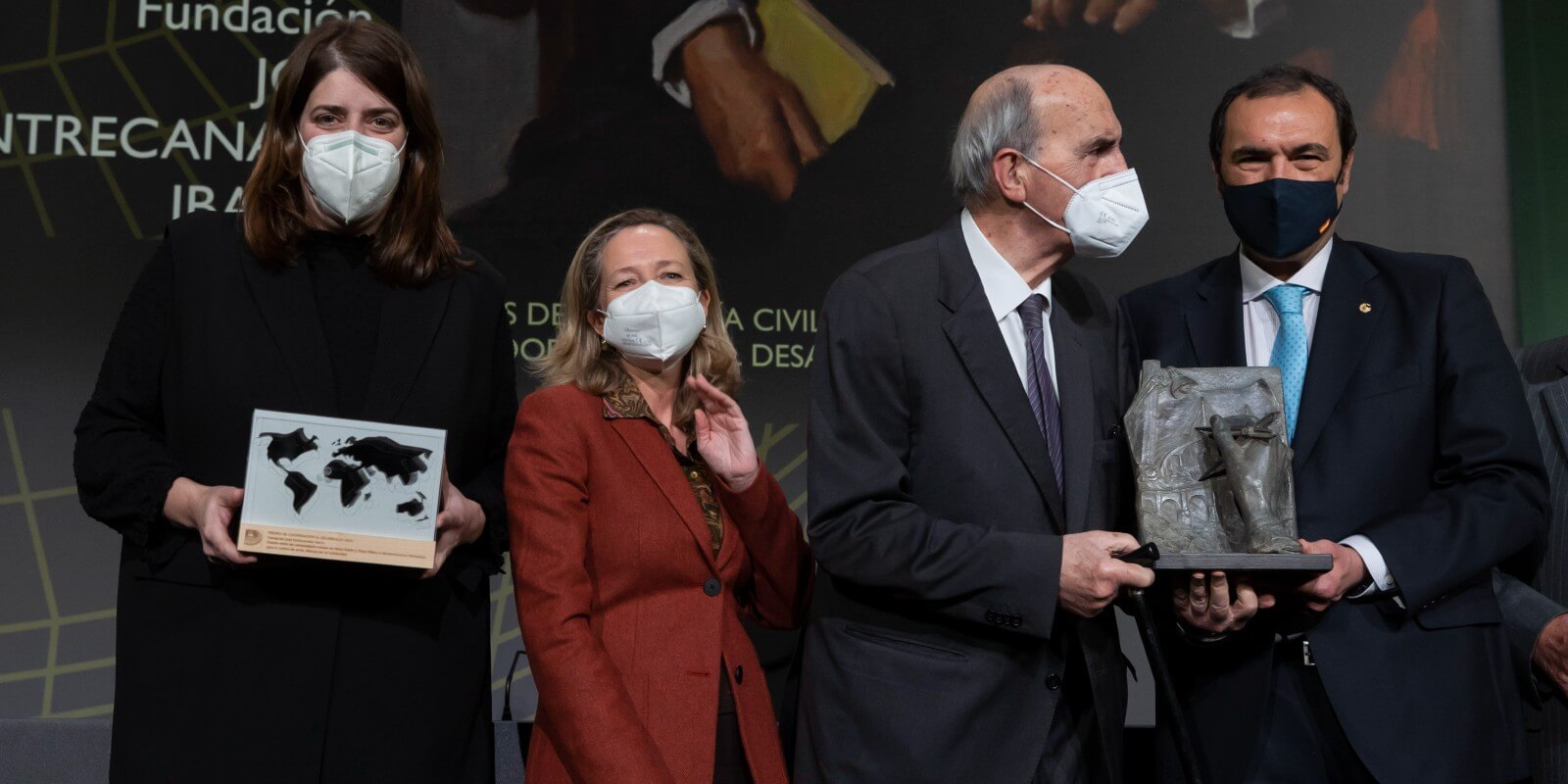 Today the José Entrecanales Ibarra Foundation has given out its International Prizes for Civil Engineering and Development Cooperation to the Spanish highway engineer Javier Manterola Armisén and to an international cooperation project between Senegal and the Gambia, organized by the NGO ‘Alianza por la Solidaridad’.

The ceremony has been held at the Civil Engineering School of the Polytechnic University of Madrid, and was presided by the Spanish government’s First Vice-President and Minister of Economic Affairs and Digital Transformation, Nadia Calviño.

Every three years, the Foundation grants the "José Entrecanales Ibarra Awards", through which it aims to promote Civil Engineering and the recognition of its most outstanding professionals, as well as to highlight its importance in the field of Development Cooperation.

In this edition, in which the awards ceremony has been delayed due to the COVID-19 pandemic, the Jury decided to award the Civil Engineering Prize to a Spanish civil engineer, Javier Manterola Armisén, for the first time.

Manterola holds a PhD in Civil Engineering and worked as a professor at the Madrid School of Engineering from 1976 until his retirement. He had a long career in civil engineering, standing out for the design of bridges with wide international recognition, such as the "1812 Constitution Bridge", popularly known in Cadiz as “Puente de la Pepa”. He has obtained awards such as the National Engineering Award (2001) and the Prince of Viana Culture Award (2006) for his career, among many others, and he has been a member of the Royal Academy of Fine Arts of San Fernando since December 2006.

The Jury also decided to award the 5th Development Cooperation Prize to the project titled "Recovery of arable land and free movement between Senegal and the Gambia: Dam-cum-bridge over the Sofaniama River between the rural communities of Nioro Katim and Passy Ndery and water infrastructure for rice cultivation", organized by the NGO ‘Alianza por la Solidaridad’.

The project seeks to ensure the free movement of people and food between the two locations, as the current crossing remains flooded most of the year, endangering the lives of the people

who pass through it daily, as well as to preserve lands for the cultivation of rice, the basic ingredient of local meals.

In the last edition, when King Felipe VI gave out the awards in 2017, the winners were the Japanese engineer Shigeo Takahashi, an expert in coastal engineering, disaster prevention and tsunami studies; and a project by ‘Ayuda en Acción’, which involved the construction of a dam that ensures water supply to rural Andean communities in Bolivia.

In previous editions, internationally renowned figures have won the prize for the engineer of the year, such as Leslie E. Robertson (a pioneer in the design of skyscrapers such as the Shanghai World Financial Center, the Bank of China Tower in Hong Kong and the Twin Towers in New York City), Giuseppe Lombardi (the author of large hydropower plants and dams in Switzerland, Austria, Italy, Mexico and Ecuador) and Jörg Schlaich (a designer of major infrastructure, including the Olympic stadium in Munich).

In the Development Cooperation category, previous prizes were awarded to the "Agua Solidaria" project organized by ‘Bomberos Unidos Sin Fronteras’ for a drinking water purification and supply system in the Peruvian Amazon; to the ‘Practical Action’ organization for the connection of 24 isolated villages in Nepal via cableways; to the NGO ‘Rescate Internacional’ for the construction of a water supply system in Ethiopia; and to the ‘Campesinos para el Desarrollo Humano’ association for the construction of a bridge in El Salvador.