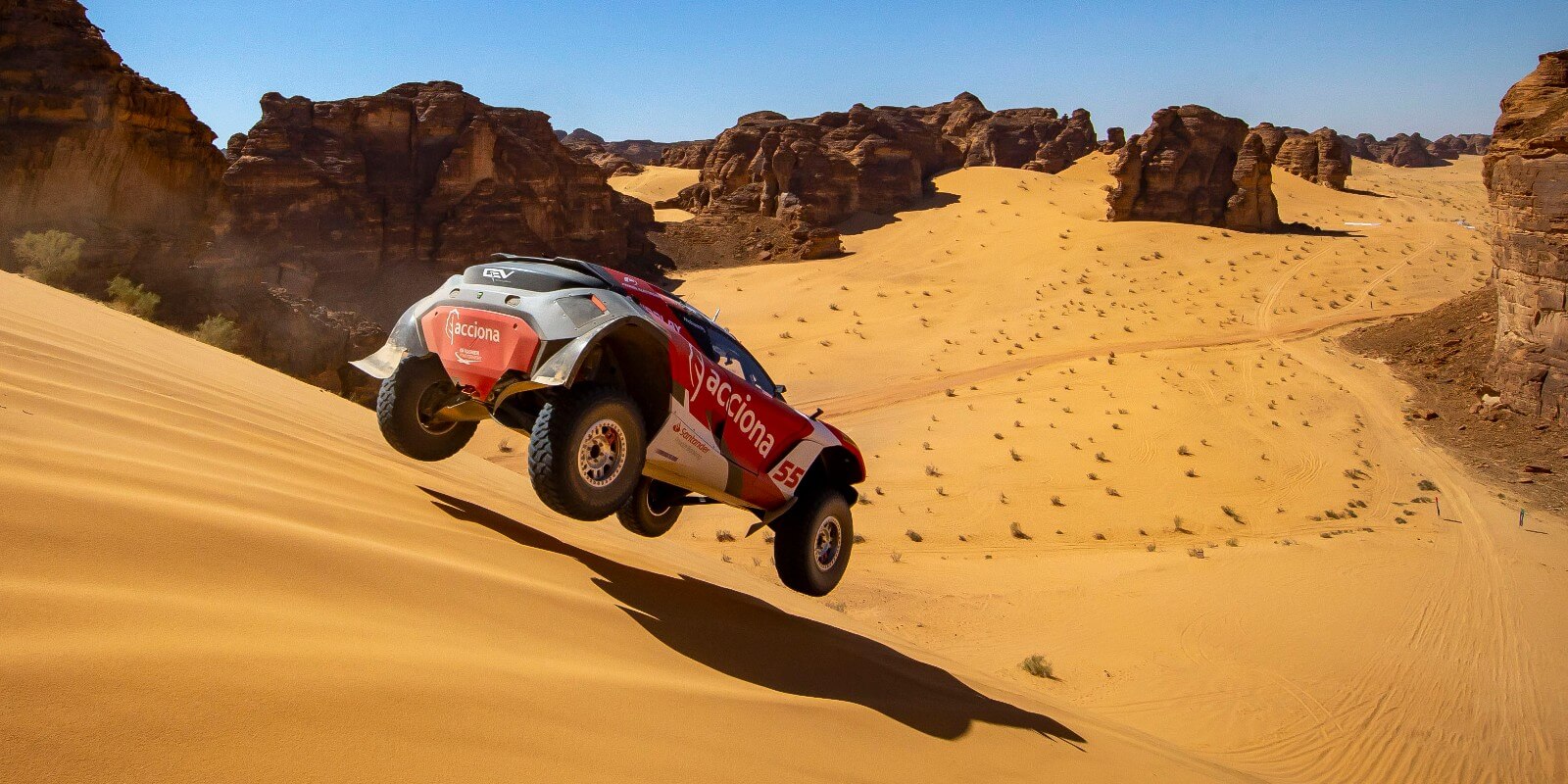 The ACCIONA | SAINZ XE Team will once again compete in the second season of Extreme E, the pioneering motorsport championship that promotes a system without CO2 emissions, the fight against climate change and gender equality in the teams’ formation.

After the inaugural season’s end, the ACCIONA team now consolidates its sports project with Carlos Sainz and Laia Sanz behind the wheel. In this second season, the goal for the only Spanish team will be to fight for the trophy in the five races of the championship, designed to raise awareness of the climate crisis’ consequences in different ecosystems on four continents.

The ACCIONA | SAINZ XE Team reached the podium in the Greenland race of the inaugural season and its competitive comeback in the last races of 2021 as well as its increased experience (especially for Laia Sanz after her debut in the Dakar 4x4 Rally) suggest it will have an upturn in performance in this new edition.

A total of ten teams, made up of some of the most notable figures in the motorsport world, will take part in the second season of Extreme E with their Odyssey21 (the competition's 100% electric SUV). The championship, which is a signatory to the UN's Sport for Climate Action Framework, is involved in various partnership initiatives with local organizations focused on the environmental and social rehabilitation of each of its sites.

With this new foray into top-level motor racing, ACCIONA seeks to reinforce its social commitment to the fight against climate change and the need to accelerate the transition to a low-carbon economy through mass sports events.

Joaquín Mollinedo, ACCIONA's general manager of Institutional Relations, Communications and Branding, says "ACCIONA is looking forward to the second season of Extreme E with great enthusiasm. Through the ACCIONA | SAINZ XE Team, we consolidate our support for a new, more sustainable and egalitarian way of approaching high-level motor racing. We return together to an initiative that goes beyond sport, as it will help convey messages to the public about the immediacy of climate action or the reliability of sustainable mobility".

ACCIONA already hit a milestone in the motorsport world in 2017 by leading the first 100% electric vehicle project capable of finishing a Dakar Rally championship, demonstrating the competitiveness of sustainable mobility in one of the toughest races on the planet.

The pair of ACCIONA | SAINZ XE Team drivers brings together two of the most fruitful talents in Spanish motorsport: Carlos Sainz, the two-time WRC World Rally Champion and three-time Dakar Rally winner, and Laia Sanz, 14-time Trial World Champion, six-time Enduro World Champion and winner of the Dakar Rally in the women's motorcycle category on eleven occasions, among other her other achievements.

Before the start of this new adventure, Carlos Sainz says "all the members of the ACCIONA | SAINZ XE Team are very excited because we want to fight for everything. The experience we gained in 2021 should help us to take a step forward and compete for better results and even for the championship. The level is really demanding, but we want to win and, simultaneously, send the strongest possible message about the importance of respect for the environment and sustainability".

Laia Sanz foresees "a different year to 2021, because we are not starting from scratch. The team is already experienced with the Odyssey 21 and I myself have been able to drive many more kilometers on four wheels, so I am convinced that I will be able to help the team much more. In the last two races of 2021 we already took a step forward in terms of performance and I think that's encouraging for what's yet to come."

As for the rest of the team, the basis of the ACCIONA | SAINZ XE Team remains the same, although the founder of QEV Tech, Joan Orús, will act as Team Principal this year. Likewise, Andrés Castillo will become the Team Manager of the only 100% Spanish team in the championship.

The 2022 Extreme E season will consist of five X Prix spread between February 19th and November 27th. The championship maintains Saudi Arabia as the inaugural country.

The location will change from Al-Ula to a desert area close to the Neom project, the first 100% technological and emission-free city that will use desalinated water as well as solar and wind power.

This first Desert X Prix will bring viewers closer to the impact of desertification, the loss of biodiversity and the effects of extreme temperatures in one of the most water-scarce areas of the world.

It will be followed by the Sardinia race, which will feature once again in the calendar, while Senegal will be the third location of the championship, pending official confirmation.

Extreme E will end with its first visit to the Americas after the COVID disruption prevented it in the inaugural season. The championship will land on the Latin American continent with races in Chile (Copper X Prix) and Uruguay (Energy X Prix).