ACCIONA completes the assembly of a 405 MWp photovoltaic plant in Mexico, installing over one million panels in two months

ACCIONA Energía completed the assembly of the ‘Puerto Libertad’ photovoltaic (PV) plant in the Sonora desert (Mexico) in 2018. The 404.57 MWp-capacity plant is the biggest renewable facility of its type built by the company. To achieve this, ACCIONA installed more than a million photovoltaic panels (1,072,909) with an associated capacity of 356,02 MWp in two months, from 19 October to 19 December, a construction milestone for this type of plant that is accompanied by another day record figure: on 18 December the company assembled 43,080 modules (14.29 MWp).

ACCIONA Energía is building this plant as a turnkey project for the joint venture that owns it, ACCIONA holding 50% and the other 50% Tuto Energy (Biofields Group). With total planned capital expenditure of 349 million US dollars (303 million euros at current exchange rate), ‘Puerto Libertad’ will enter service during the first quarter of 2019.

“To date we had never reached such a pace of activity in the construction of a photovoltaic plant. In ‘Puerto Libertad’ we have achieved very efficient working practices born of our experience in previous projects, and this has enabled us to complete the assembly of the plant in record time and also contribute to a major increase in our installed capacity in Mexico”, ACCIONA Energía México CEO Miguel Angel Alonso explained.

The construction of the plant created an average of 600 jobs, with activity peaks when more than 1,300 people were employed. When fully operational it will provide stable employment for 38 people.

The ‘Puerto Libertad’ photovoltaic plant consists of 1,222,800 polycrystalline silicon panels installed on 1,496 horizontal tracking structures with a solar radiation collection surface area of 2.4 km2 (equivalent to 333 professional soccer pitches).  It is located in the municipality of the same name near the coast of the Gulf of California in Lower California around 200 kilometers northwest of Hermosillo, the capital of the State of Sonora.

The plant will produce approximately 963 gigawatt-hours (GWh) of energy per year, covering the electricity demand of 583,000 Mexican households. Given its renewable nature, the energy produced will avoid the emission of 925,443 tonnes of CO2 to the atmosphere from coal-fired power stations every year, with a cleaning effect on the atmosphere greater than that of 46 million trees.

Second country for ACCIONA Energía in terms of implementation

With this renewable energy plant, ACCIONA Energía now has 1,144 MW in Mexico (739.5 MW from wind power and 404.5 MWp from PV), making the country the second most important worldwide for the company in terms of owned capacity, after Spain. The net figure for ACCIONA’s capacity in Mexico is 942 MW.

The construction of ‘Puerto Libertad’ also means that ACCIONA has more than doubled PV capacity under its ownership in the world, with plants in Mexico, Chile, South Africa, Portugal and Spain. The company is also constructing PV plants in two other countries -Egypt and Ukraine- that will take it above 1,000 MWp of total capacity in 2019. 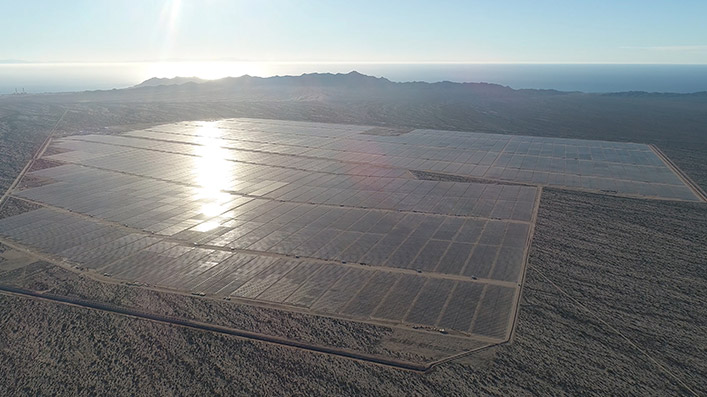 Photo caption 2: The assembly of the Puerto Libertad PV plant ended in 2018

Photo caption 4: The installation will generate energy equivalent to the consumption of 583,000 Mexican households