ACCIONA commemorates the centenary of the hydro plant at Seira (Spain), a milestone in the development of the region

Today, ACCIONA Energía celebrated the centenary of the Seira hydroelectric plant, located on the banks of the river Ésera in the area of La Ribagorza (Huesca, northern Spain). Its construction between 1912 and 1918 represented a major boost to the area’s development. One hundred years later, it continues to produce renewable energy equivalent to the annual consumption of around 20,000 households.

The construction of the hydroelectric plant at Seira was a milestone in the development of an area dedicated to agriculture and stockbreeding until then. It was quite isolated due to its position in the Central Pyrenees near the Maladeta mountain range, home to the highest peak in the Pyrenees: Aneto (3,404 m).

Developed by the company Catalana de Gas y Electricidad to supply electricity to a textile factory near Barcelona, the construction of Seira led to the creation of a new settlement nearby. This new village still exists in the same municipality of Seira, built because of high demand for labour in the building of the plant, with around 2,300 workers from all over Spain.

The commemoration ceremony held in the plant today was attended by the Director-General for Energy and Mines of the Government of Aragon, Antonio Gómez, the Vice-president of ACCIONA, Juan Ignacio Entrecanales, and the Mayor of Seira, Daniel Larramona, together with other authorities, company managers and representatives of organizations related to the plant and the district, among other guests.

During the event a tribute was paid to the people who participated in the construction of the plant and the nearby settlement. Mementos were presented to relatives of Federico Jiménez del Hierro and Diego José Mayoral, the engineers who headed the construction project of Seira.

The work of all the employees of the plant over its 100-year existence was also recognised, represented by José Mª Pallaruelo, Gerardo Fanlo and Francisco Pallaruelo, each of them with over 40 years’ service.

In his speech, and after expressing his gratitude to those who carried out the construction and operation of the plant over a century, Vice-President Entrecanales reminded the audience that the company has 690 megawatts of hydro capacity in Aragon in 37 plants, 79% of its total. “We are committed to the efficient management of these installations,” he said, “which continue to contribute clean energy to the grid and also generate added value for the municipalities where they are located”.

The Seira hydropower plant is a fine example of early-20th-century civil engineering. Its construction had to overcome difficulties of extreme conditions of the terrain and the climate in the area, together with others arising from historical circumstances such as the First World War (1914-1918) or the Spanish flu epidemic of 1918.

The building work involved complex tasks such as the digging of a tunnel more than 8 kilometres long to take the water to the plant; a 4-kilometre power line to span the narrow Ventamillo gorge; the foundations of the Villanova dam with caissons of compressed air, or the installation of a 1,100-metre-long pressure pipe with a difference in height of 146 metres.

The plant entered service on August 6th 1918 and has operated continuously since then, except for one-off shutdowns. It has been updated in aspects such as the electrical equipment and control and communications systems, while maintaining basic features of the original construction such as the buildings, the canal, the pressure piping or the turbines. Seira produces an average 80 gigawatt-hours (GWh) per annum, equivalent to the electricity consumption of around 20,000 households and avoiding the emission of 76,000 tonnes of CO2 to the atmosphere from coal-fired power stations.

It is a run-of-the-river power plant where the water intake is a diversion of the river Ésera at the Villanova dam. From there, it is taken 8.8 kilometres -mostly through a pipe inside a tunnel- to a regulating tank, from where it continues through a 1.1-kilometre dual pressurized pipe as far as the plant, with a gross head (steep drop) of 146.5 m.

The plant building houses three horizontal-shaft Francis turbines that transform the kinetic energy of the falling water into rotational energy to drive the generators, which have an overall capacity of 36.7 megawatts (MW). The voltage of the power generated is raised in the transformers in the plant from 11 kilovolts (kV) to 110 kV prior to its injection into the grid. After passing through the turbines, the water is returned to the river Ésera.

The plant has been operated by ACCIONA Energía under its ownership since 2009, when it was acquired from Endesa in an operation to purchase more than 2,100 MW of wind power and hydropower assets from that company. 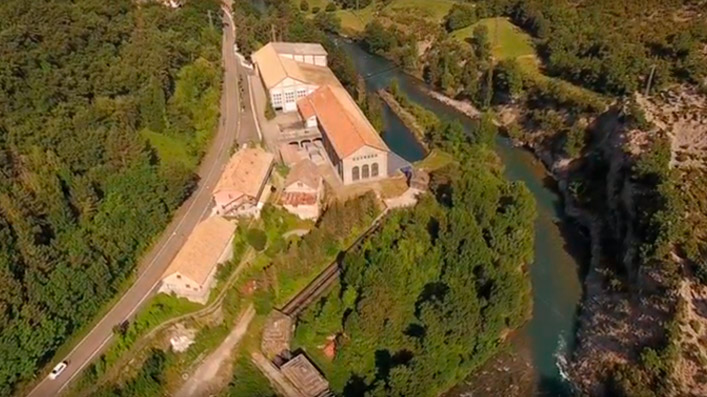