The Walterdale bridge: a major engineering feat that enhances a city 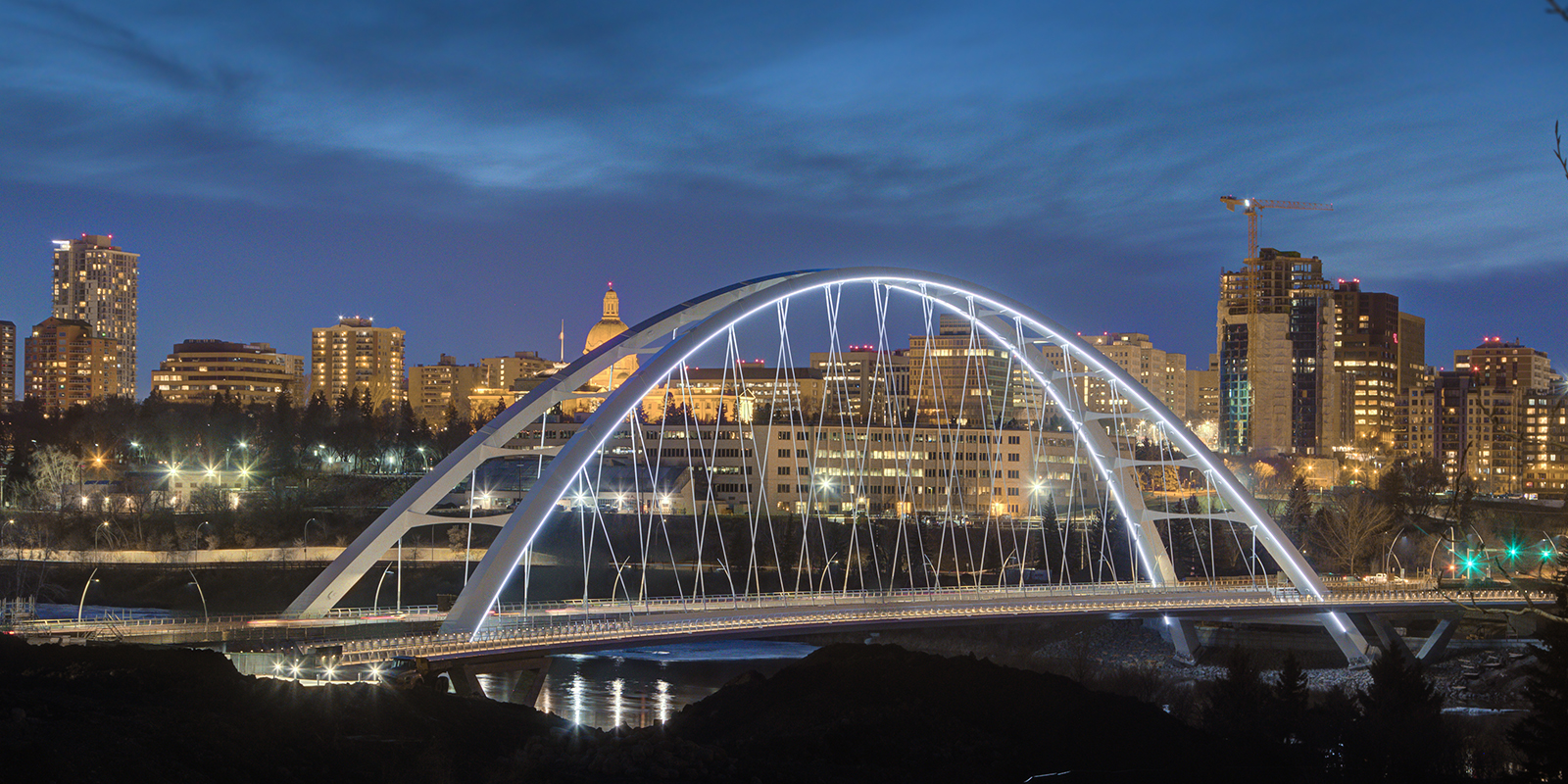 One of the challenges that large cities are facing is how to replace aging but essential infrastructure without disrupting the daily lives of its residents. You can resurface a busy street or repair a burst water main overnight, but how do you replace a bridge that connects two parts of a city and that is used daily by thousands of vehicles without bringing the lives of its residents to a standstill?

This is the challenge the City of Edmonton (Canada) had to face when they acknowledged the need to replace the Walterdale Bridge, which had been used to cross the Saskatchewan River for more than 100 years. The existence of a large open space alongside the old bridge meant that the simplest solution was also the most effective one. The new bridge would be constructed just a few metres away from the old one, meaning that traffic over the river would not have to be disrupted.

The project developers also decided to increase the capacity of the new Walterdale Bridge compared to the old one, increasing it from two single-direction lanes, to three single-direction lanes and a pedestrian walkway, with the option to widen the deck and create a fourth lane in the future. New construction techniques and the functional requirements of the project meant that the complex three-section metal structure of the old bridge could be replaced with a slim single-span bridge with a concrete deck suspended on cables from two large metal arches.

This was the task commissioned by the City of Edmonton and that ACCIONA undertook, leading a joint-venture with Pacer Canada. The project used the most modern construction techniques. It also presented plenty of challenges, one of them being the freezing winter temperatures that construction crews must face while working on these types of infrastructure in Alberta (Canada).

The new Walterdale Bridge, with its elegant profile, intends to become an iconic structure in the Edmonton skyline. And the process to build such engineering marvel was no less spectacular. It began with construction of the thrust blocks for the arches – huge blocks that penetrate 20 metres underground, each one consisting of 600 m3 of concrete and 100 tons of steel.

As a start, the centre arch was put together at an assembly site alongside the definitive bridge, supported by provisional towers. This arch section, which consists of 950 tons of steel, was gradually shifted onto provisional support towers on floating barges on the river. Once supported on these towers, this central section was floated up the river into a position from where it could be hoisted, where special jacks were used to raise the arch by 20 meters to its final height of 54 meters above the river.

The remaining sections of the arches, previously constructed and also supported on provisional towers, were already in position. Once all of the sections were assembled, the completed arch structure weighing 2,000 tons was hoisted another 20 metres into place for its final position.

The steel deck was then assembled, which weighed a further 1,000 tons. This manoeuvre was performed using a cantilever system with cranes installed on the river banks, simultaneously installing the cables from which the deck would be suspended under the arch.

Lastly, the decking was concreted and the pedestrian walkway was added, suspended from the arch of the bridge and attached to the deck through bolted connections to the floor beams. This configuration makes the new Walterdale Bridge really unique, giving it structural asymmetry.

In terms of the scale of the project, the figures speak for themselves – a total length of 230 metres from one abutment to the other (206 metre span), a 54 metre arch measured from the deck, which itself is 22.5 metres wide. A further 1,000 tons of provisional structures were used to raise the bridge, in addition to the 5,000 tons of constructed works.

A colossal project, which required a tremendous amount of coordination. While the provisional towers were constructed by the Joint Venture, the metallic structure of the bridge was manufactured in sections in South Korea.

Now that the new Walterdale Bridge is opened, Edmonton’s residents are able to enjoy the benefits of a safer commute and better traffic flow, as well as a beautiful structure that enhances their city landscape.