The most efficient technology to produce energy in a safe and environmentally sustainable manner: it is zero emissions, local, inexhaustible, competitive and it creates wealth and jobs.

WHAT IS WIND POWER?

Wind power is the energy obtained from the wind. It is one of the oldest energy sources exploited by humans and today is the most established and efficient renewable energy source. The academic term for wind power—eolic energy—is derived from the name of the Greek mythological figure, Aeolus, the keeper of the winds.

HOW DOES WIND POWER WORK?

Wind power consists of converting the energy produced by the movement of wind turbine blades driven by the wind into electrical energy.

Watch this video to learn about how electricity is derived from wind energy.

Wind energy is a source of renewable energy. It does not contaminate, it is inexhaustible and reduces the use of fossil fuels, which are the origin of greenhouse gasses that cause global warming.

In addition, wind energy is a “native” energy, because it is available practically everywhere on the plant, which contributes to reducing energy imports and to creating wealth and local employment.

Wind energy does not emit toxic substances or contaminants into the air, which can be very damaging to the environment and to human beings. Toxic substances can acidify land and water ecosystems, and corrode buildings. Air contaminants can trigger heart disease, cancer and respiratory diseases like asthma.

Wind energy does not generate waste or contaminate water—an extremely important factor given the scarcity of water. Unlike fossil fuels and nuclear power plants, wind energy has one of the lowest water-consumption footprints, which makes it a key for conserving hydrological resources.

Wind power is the most efficient technology to produce energy in a safe and environmentally sustainable manner: it is zero emissions, local, inexhaustible, competitive and it creates wealth and jobs.

Renewable energies are already the cheapest energy sources, and this will increasingly be the case. Wind power has advanced enormously from a technological viewpoint and their installation costs have lowered markedly. Over the past decade, the cost of onshore wind turbines has fallen by 37% and lithium batteries for storing electricity by 85%

Wind turbines are lethal for birds

The deaths of birds and bats by collision with wind turbines is much less than those produced by other human-led activities such as roads, railways, buildings or domestic cats, as well as those caused by the air pollution wind power helps to avoid.

Every renewable energies project must be accompanied by an environmental impact study before it can be approved by the competent authorities, which establish whether the site is compatible with the nature surrounding it, and corrective measures need to be adopted to minimize any harmful effects, e.g. monitoring and control by specialized teams, development of technological solutions such as repellents (ultrasound, noise and lights), detection and shutdown systems.

The surface area occupied by a wind turbine is minimal. In fact, wind farms are perfectly compatible with farming and livestock activities carried out on the same land.

A wind turbine offsets the energy used to make it in less than a year – and can function for over 30 years. Every wind turbine generates enough clean energy to cover the electrical demand from some 2,000 homes*. Moreover, the emissions produced by the manufacture and dismantling of a wind turbine represent around 1% of those it will avoid during its useful life in replacing production from coal, gas or fuel oil power stations, and this without counting the CO2 emitted during the building of those fossil fuel stations, nor the extraction or transport of fuel to those plants.

The noise produced by a moving wind turbine at a distance of less than 500 meters, within which there are rarely homes anyway, is no greater than that produced by an electrodomestic appliance such as a fridge or microwave. Wind farms also have to comply with local regulations with respect to noise levels during the day and night and cannot exceed the limits established by law.

A renewable energies myth being spread in only a few countries. Independent public and private research has been conducted, however, and has concluded that there is no direct connection between wind farms and reported incidents of fainting or headaches.

HOW MUCH OF THE WORLD'S ELECTRICITY IS GENERATED FROM THE WIND?

WHICH COUNTRIES ARE LEADERS IN IMPLEMENTING WIND ENERGY AT THE GLOBAL LEVEL?

By the end of 2015, wind power capacity totalled 400,000 MW in the world, according to provisional estimates by consulting firm Navigant/BTM, which forecasted that this would increase by over 40% by 2019, to exceed 600,000 MW.

Spain has been one of the leading, pioneering countries in exploiting the wind to produce electricity. Thirty years after installing the first wind turbine in the country, Spain became the first country in the world to rely on wind energy as the main source of electricity for an entire year (2013, with 20.9 % of total production). This also established Spain as an advanced country in terms of technological solutions that allow integration of wind energy into the grid.

Although installation of wind energy facilities has slowed in Spain in recent years, with around 23,000 MW installed at the end of 2015, the country still holds second place in Europe for wind power production after Germany (43,723 MW), and is fifth in the world, after China (138,060 MW), the USA (71,000 MW) and India (25,219 MW), according to the estimates by the same consultancy firm. 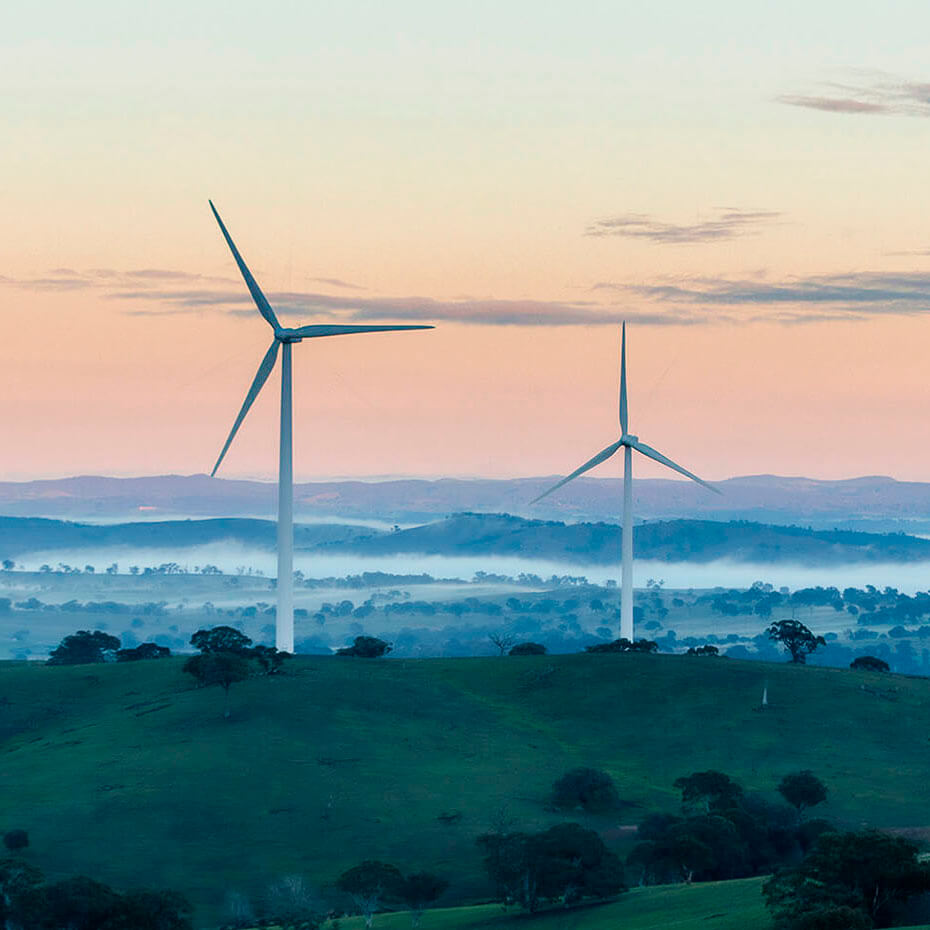 WHAT DOES ACCIONA DO REGARDING WIND POWER?

ACCIONA positions itself as a key player in halting the advance in global warming and promoting the transition to a carbon-free energy model.

KNOW WHAT WE DO

Do you want to know how to build a wind farm?

What is a wind turbine, how does it work and how is it installed?

Know what it is and what the benefits of solar energy are.