Lines 9 and 5 of the Barcelona Metro

ACCIONA is a leading company in the design, construction and commissioning of transport infrastructure in cities. Throughout its history, the Company has developed innovative, sustainable and responsible solutions adapted to specific cases, both in Spain and worldwide.

2002 saw ACCIONA use the EPB TBM, with a record 12.09m bore, to perform works on this section of Metro line 9. The works consisted of boring two tunnels, of 4.6km and 6.15km length, at great depth, between the different stations of the section. Furthermore, ACCIONA carried out the extension of Barcelona Metro line 5, involving 2.6 km of new route, three stations and a 300m-long train depot. Conventional tunnel excavation methods were used in all the underground works in Barcelona's complex urban environmen.

The scope of the project involved the implementation of the infrastructure, superstructure and electrification of the extension of line 5 of the underground railway in the city of Barcelona, from the previously existing Horta station to the new Vall d'Hebron station. The total length of the section is 2.47 km.

Drilling of the main tunnel and the rest of the underground elements was carried out using the new Austrian method (NATM) by mechanical excavation (drilling and blasting) split into heading and upper bench excavation phases and the installation of a flexible support. The caverns for the construction of the stations were bored using drills and blasting. 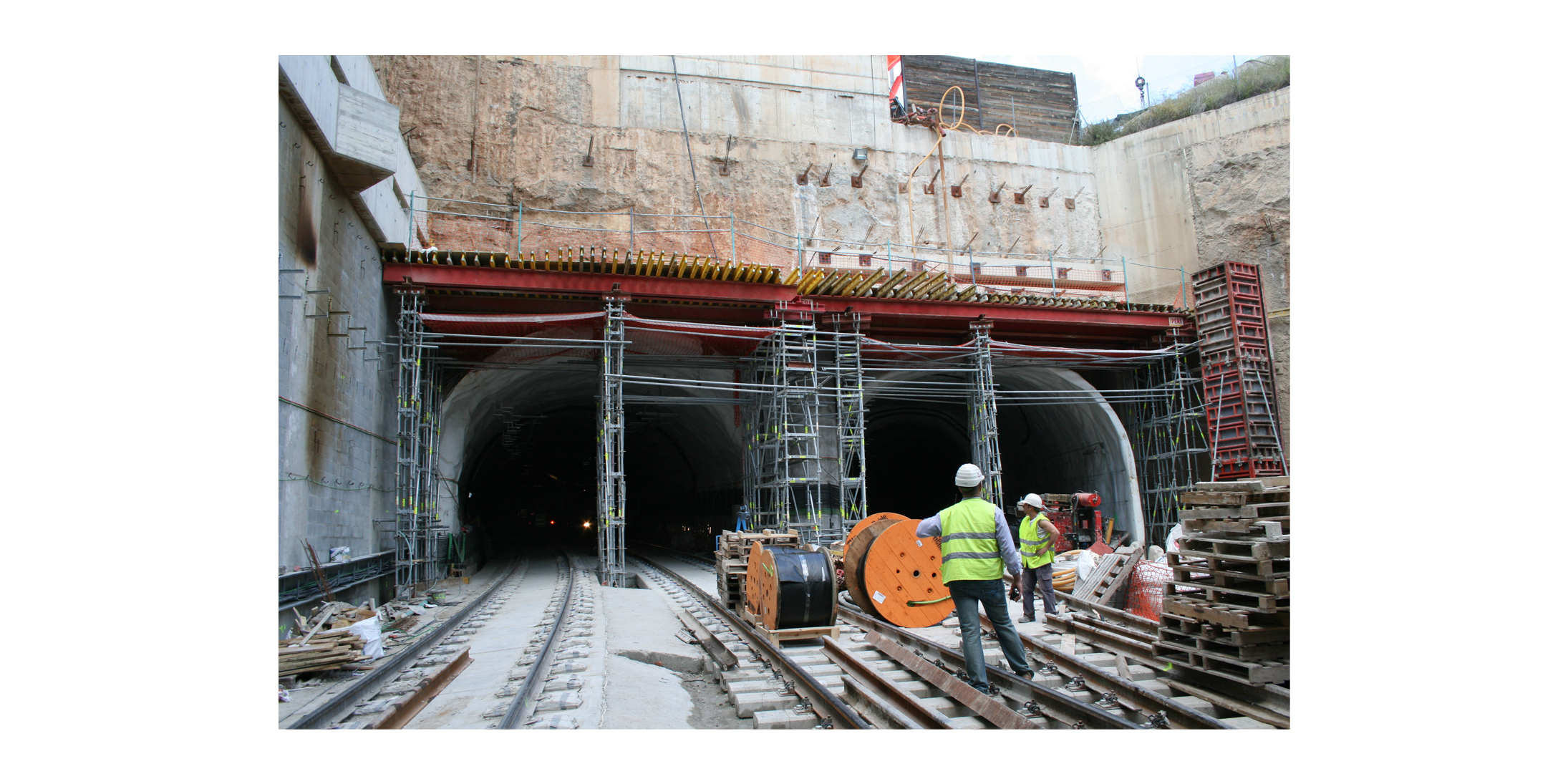 This represents the longest underground line in Europe, at 50 km long and with 52 stations. It is also the deepest line in Barcelona, reaching a depth of almost 85 m. Line 9 of the Barcelona Metro established a direct connection between Barcelona airport and the city centre.

The Barcelona Metro Line 9 project is an automated, driverless metro system built in a dense urban area in Spain's second largest city, with a population of approximately 1.6 million people. ACCIONA was responsible for managing the construction and design equipment of the design and construction contractor; coordinating all interfaces and disciplines during design and construction; and implementing quality, safety and environmental management systems.

The contracts awarded are located in a very complex urban environment, and involved the construction of 3.9 km of drilled tunnels using the EPB tunnel boring machine, six large underground stations and 657 m of false tunnels. Moreover, an additional 1.5 km of excavated tunnel was carried out with the same EPB and two "cut and cover" structures. Also included were the track-laying and catenary system. Due to the lack of surface area in this urban location, a single-track tunnel with a two-storey railway configuration was designed for this metro line.

The scope of the project included the construction of several underground concrete structures, including vertical wells for station access, stations between diaphragm walls, as well as other structures, all located in the main urban area of the city. These structures are as follows:

A total of 4,199 m of 40 cm thick intermediate slab, which divided the tunnel cross-section into two traffic levels (one in each direction), was also carried out.

Soil stabilisation, geotechnical conditions and proximity to the metro line.

Due to the conditions of the soil, soil treatments were necessary both on the surface and under the buildings above the tunnel works.

Due to the extensive monitoring and reliability of the actual data, all existing metro lines remained open at all times during the tunnelling work, where the settlements were higher than expected.

The design team did a tremendous amount of work and technical assessments to obtain better solutions for various problems:

ACCIONA developed and implemented an Occupational Safety Management System. Due to the effectiveness of its H&S plan, which ACCIONA applies to all its projects, the company was rewarded the Atlante Health and Safety Award. In Barcelona, ACCIONA used several means to communicate the results of inspections, audits, accidents, improvement activities, etc.

ACCIONA developed and implemented an Occupational Safety Management System. Due to the effectiveness of its H&S plan, which ACCIONA applies to all its projects, the company was rewarded the Atlante Health and Safety Award. In Barcelona, ACCIONA used several means to communicate the results of inspections, audits, accidents, improvement activities, etc.

The project was carried out between the "Fira de Barcelona" area and the Llobregat river, with a length of 3.8 km.

ACCIONA executed the project using the "cut and cover" technique at three underground stations (Fira, Parc Logístic and Mercabarna); three ventilation and emergency wells (Pozo Motors, Pozo 7A and Pozo 7B); two output shafts for the TBM on the Fira side and the Llobregat side of the logistics section of Pare, and a 371 m long mud-wall tunnel section between the axis on the Llobregat side and the logistics station of Pare, which will connect line 2 of the metro in the future.

Soil treatment prior to the execution of the tunnel was also carried out to guarantee the stability of the structures.

The Parc Logístic station is a 1.20 m thick wall-to-wall tunnel, with a length of 371 m. This structure provides the connection from line 2 to line 9 by means of an overhead bridge, which allows the track on line 2 to merge with the track on line 9, passing under the other line 9 track.

The stations of the section of work between the University Area and Bifurcació were executed. It consisted of the execution of three underground stations: Collblanc (deepest station in all of line 9), Torrassa and Gornal. In addition, a well outlet for the tunnel boring machine at the Campus Sud station.

The machine that even Jules Verne was unable to imagine

The technological evolution of tunneling machines, which accelerated at the end of the 19th Century and finally took off in the first half of the 20th, contributed greatly to the expansion of land transport worldwide. The excavation of tunnels to break through mountain ranges or circumvent difficult passes facilitated the ferrying by rail and road of passengers and freight, with their subsequent social and economic benefits...