WE CONTINUE THE RACE AGAINST THE CLIMATE CRISIS

We are competing in the off-road race Extreme E: 100 % electric, 50/50 split of male and female participants and ready to make a positive impact on the planet. 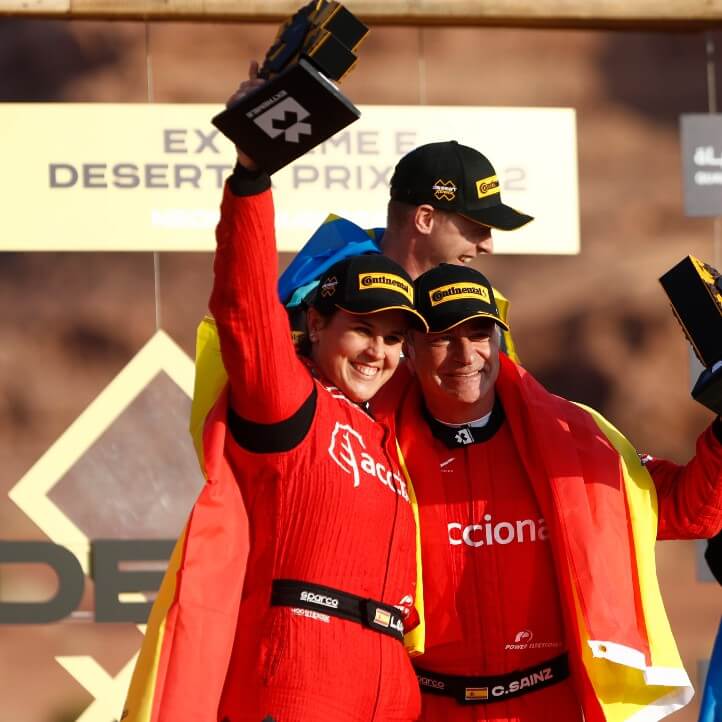 The ACCIONA | SAINZ XE Team took second place in the inaugural race of the new Extreme E season. The team led by Carlos Sainz and Laia Sanz has achieved its best participation in Extreme E and confirms its position as one of the main candidates for the final title.

Carlos Sainz led the entire first lap of the Final, while Laia Sanz kept the ACCIONA team in the lead until the second to last corner, when she was finally overtaken by current champion team Rosberg X Racing.

The ACCIONA team thus maintains its line of progress and confirms the competitive leap expected after the experience of last year’s inaugural series.

The first race of this new Extreme E season has brought spectators closer to the direct consequences of climate change in the desert ecosystem of Neom, one of the most water-scarce areas of the planet.

A RACE FOR THE PLANET

We formed the ACCIONA | SAINZ XE Team, led by drivers Carlos Sainz and Laia Sanz, with the aim of promoting the fight against the climate emergency. We are competing in the off-road race Extreme E: 100 % electric, 50/50 split of male and female participants and ready to make a positive impact on the planet.

The competition also promotes gender equality. The rules state that teams must have a 50/50 split of men and women, with the same number of kilometers driven by each team member.

The nine teams will use the Odyssey 21, the official 100% electric off-road SUV, with batteries powered by green hydrogen systems.

Discover the new stages of the second edition 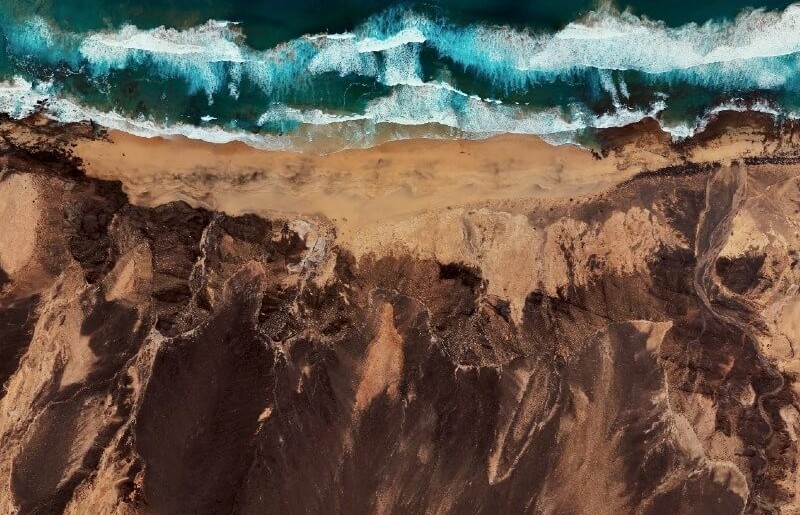 Saudi Arabia is home to the world's largest continuous sand desert, and has one of the highest levels of water stress on the planet. Off its coasts lie the coral reefs of the Red Sea, an ecosystem threatened by global warming and plastic pollution.

The Red Sea coral reefs that bathe the Saudi coast are a wonderful example of natural resilience to climate change. They are a gift, yet global warming and sea pollution threaten to damage and change them. That is why it's essential to raise public and government awareness of the need to preserve and restore these marine ecosystems.

In desert ecosystems, more water evaporates from the ground than is replenished with rainfall. Rising temperatures and water scarcity threaten the region's biodiversity.

Deserts are characterised by their extremely harsh conditions, water shortage and barren landscapes. The climate crisis demands solutions from society to protect ecosystems and curb desertification. 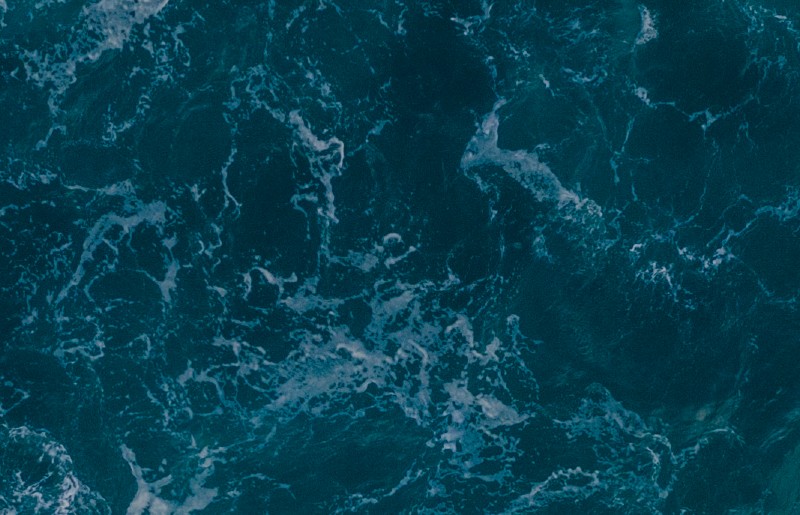 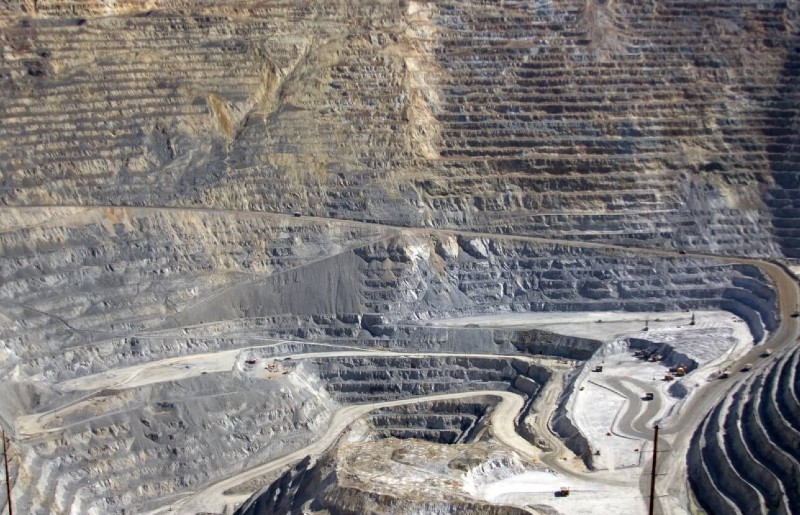 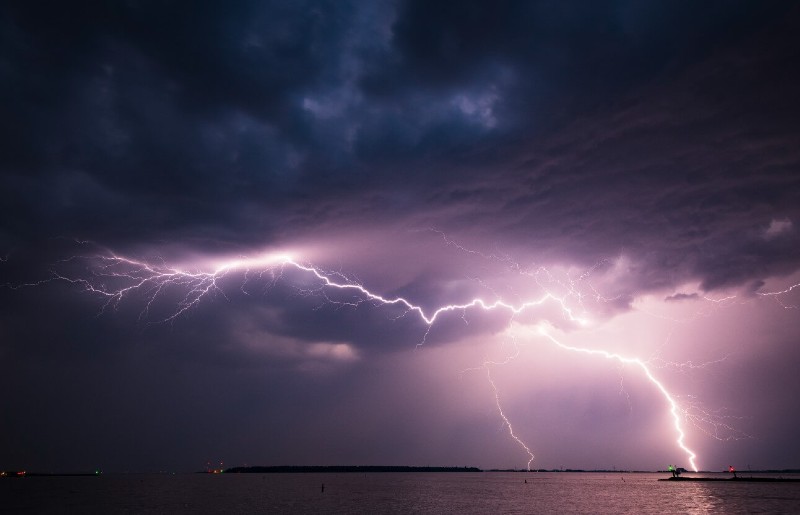 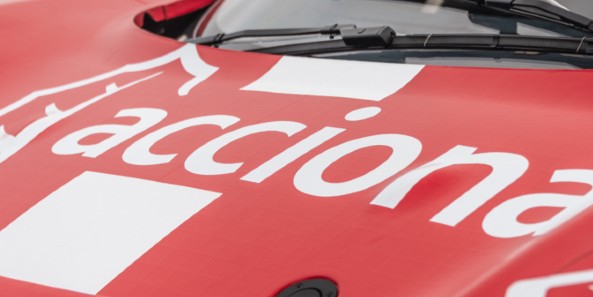 We have a conviction: It is time to accelerate the transition to a fairer, low-carbon planet. We joined the Extreme E 100 % electric, off-road, mixed gender competition to share this conviction with the world.

This is a ground-breaking 100 % electric, off-road, mixed gender competition that takes place in five locations that exemplify the ecosystems most visibly threatened by climate change. Its main purpose is environmental and social: to raise awareness on climate change and gender equality, promoting community action in the localities in which the races are held. 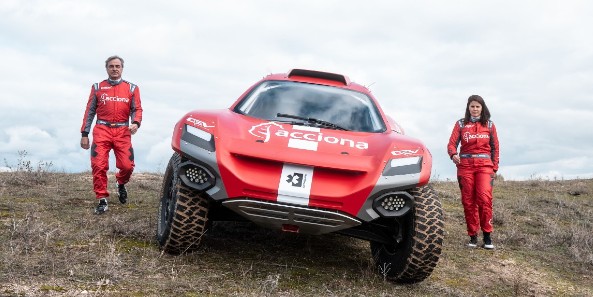 AS SIGNATORIES TO THE UNITED NATIONS SPORTS FOR CLIMATE ACTION FRAMEWORK

we are committed to:

We are committed to advacing sustainable regeneration with the participation of ACCIONA | SAINZ XE Team in Extreme E. In this first episode, oceanographer Carlos Duarte explains to Carlos and Laia what Extreme E is doing in Saudi Arabia to improve the environment where the #DesertXPrix takes place.

Everything you need to know to join the climate action for a better planet.

Legacy initiative: In this first episode, oceanographer Carlos Duarte explains to Carlos and Laia what Extreme E is doing in Saudi Arabia to improve the environment where the #DesertXPrix takes place.

Get to know our ACCIONA | SAINZ XE Team's drivers

Transport is responsible for 30 % of greenhouse gas emissions. We advocate the electrification of transport to help combat climate change, in line with the Odyssey 21: a 100 % electric all-terrain vehicle.

The Odyssey 21 is a one-off design, 100 % electric, off-road vehicle capable of withstanding the harsh terrain and temperature conditions.

IT'S ALL IN THE DETAILS

The Odyssey 21's batteries, charged by green hydrogen systems, were designed and developed by Williams Advanced Engineering. They can produce a maximum power of 470 kW.

The exterior shell of the Odyssey 21 is made from natural flax fibre, a sustainable material that, according to the Extreme E competition, enables a 75 % reduction in the carbon footprint of the entire manufacturing process. 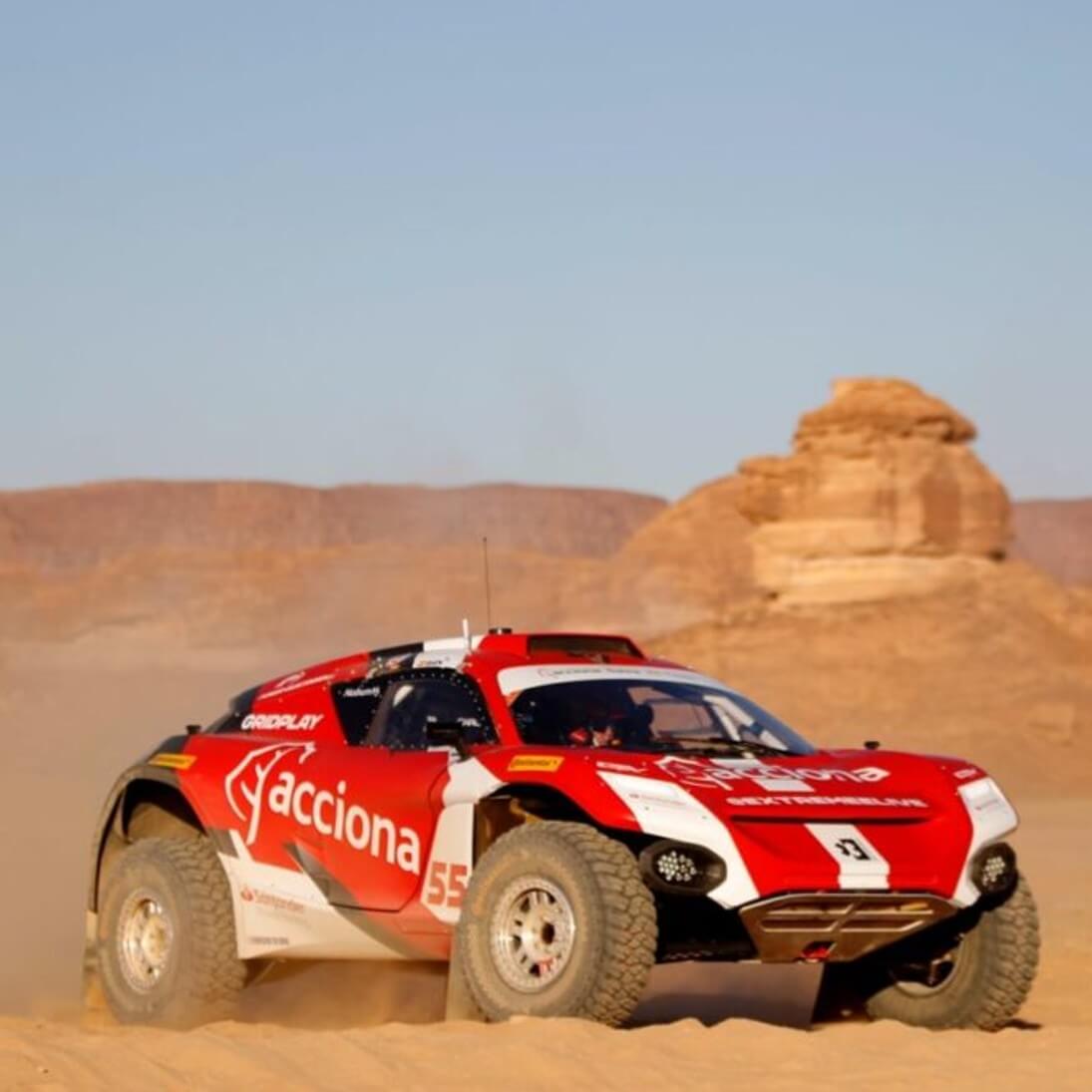 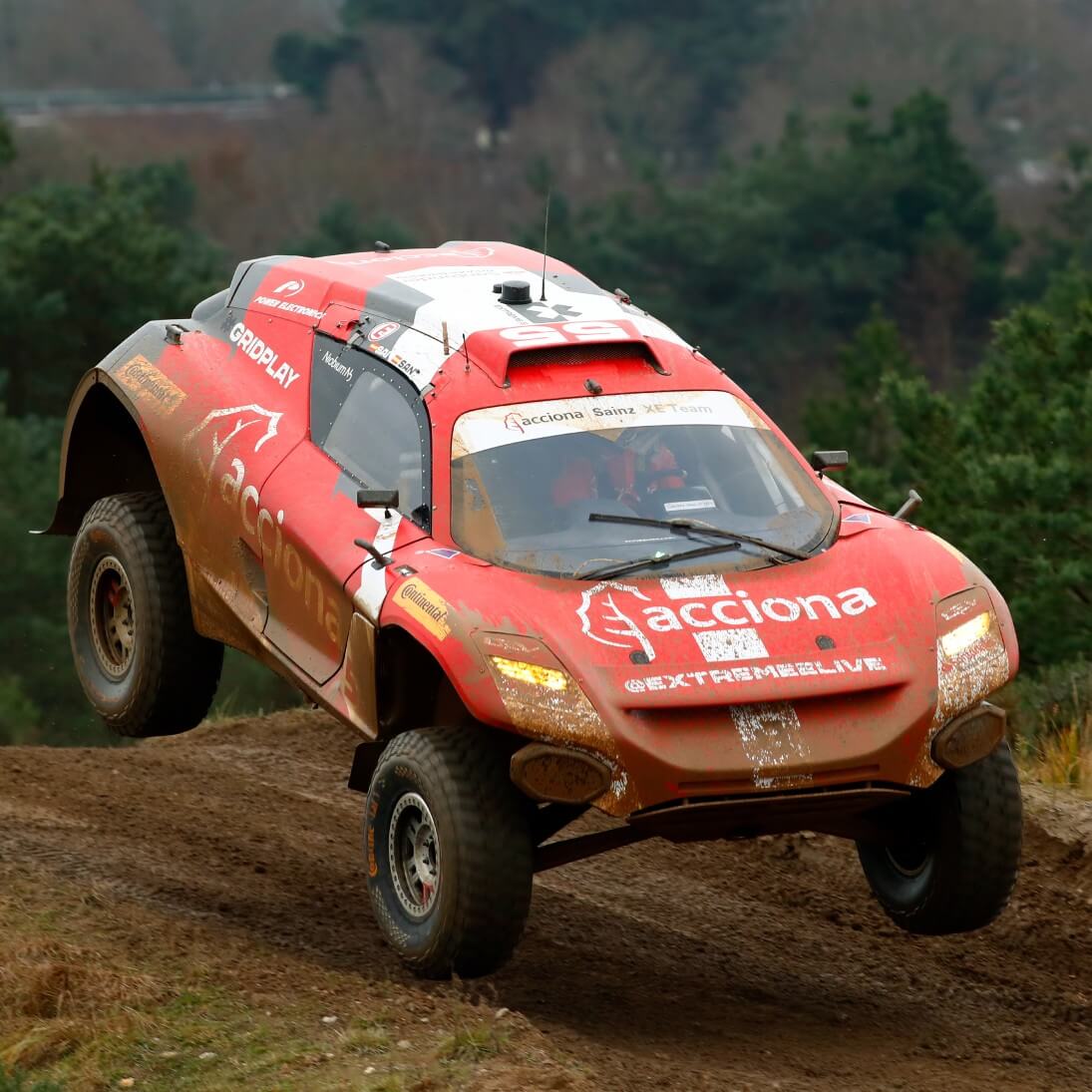 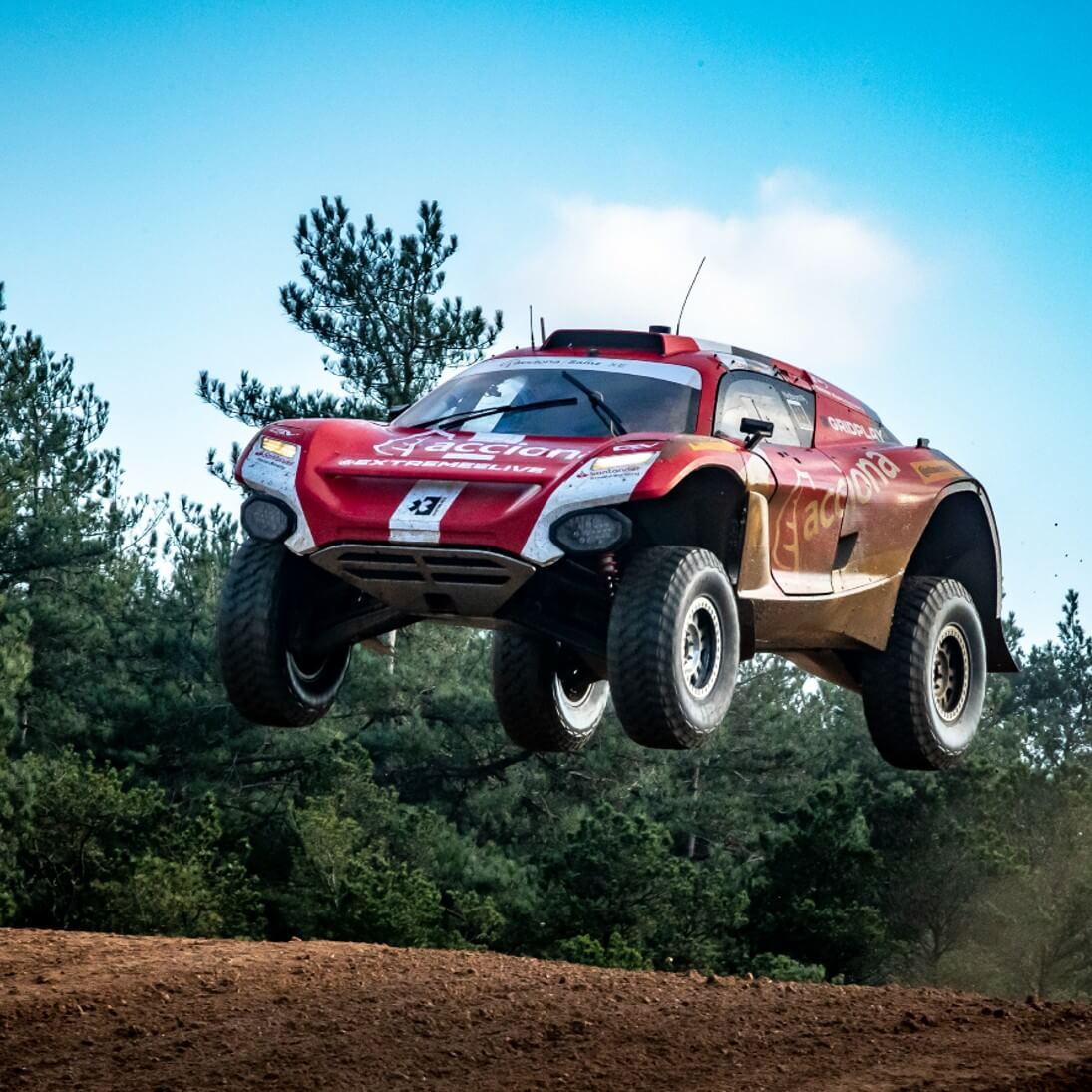 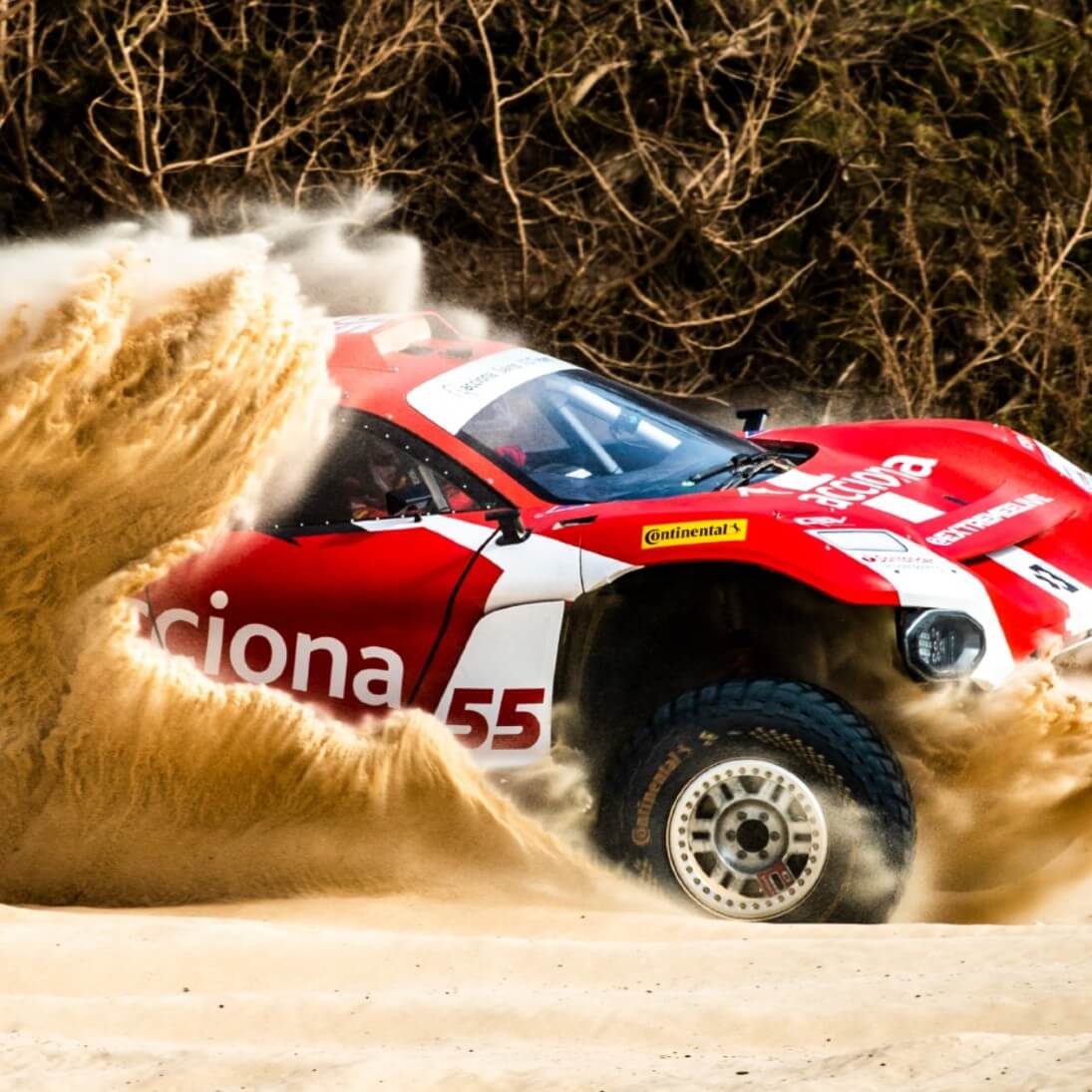 ACCIONA's team has its best result in Extreme E