in the heart of Norway

NorwaySee on Google Maps
Turnkey contractor ACCIONA is design and constructing of 23 kilometres of four-lane highway in collaboration with Norwegian state-owned Nye Veier.

The E6 between Ranheim and Værnes effectively connects the largest regional centre with its most important regional hub, including the regional airport. To do this, ACCIONA has been awarded a contract worth NOK 4.3 billion to design and build the motorway, the project has a total cost framework of NOK 7 billion. ACCIONA's commitment consists of both the design and construction of the 23-kilometers of motorway, which includes 7.3 kilometres of tunnels, three new motorway bridges and five new two-level intersections.

As part of the upgrade of the existing tunnels, ACCIONA will build new portals and renew the infrastructure. This will increase the capacity of the E6 from two to four lanes and significantly improve traffic safety and reduce the need for detours during maintenance work. Construction, which started in 2020, is scheduled for completion in 2026. Until its re-opening, ACCIONA Construction will also be responsible for managing traffic and constructing temporary alternatives to maintain the flow of vehicles between the two key hubs.

The new design and construction include following:

Since the project was awarded in 2018, ACCIONA has completed basic design work with Nye Veier under the client-contractor association model being implemented in the Norwegian public works market. ACCIONA utilizes local entrepreneurs for much of the development

Basic design work included reducing the risk of unforeseen circumstances. It also optimised the road design to improve safety and traffic flow during the construction phase.

km of a four-lane highway

tunnels between 1 and 4 kilometres in length

A business model based on sustainability

Where do we build when?

On behalf of Nye Veier, we will build a 23 km new four-lane motorway from Ranheim to Værnes. Here is an overview of the start of construction on the various projects. 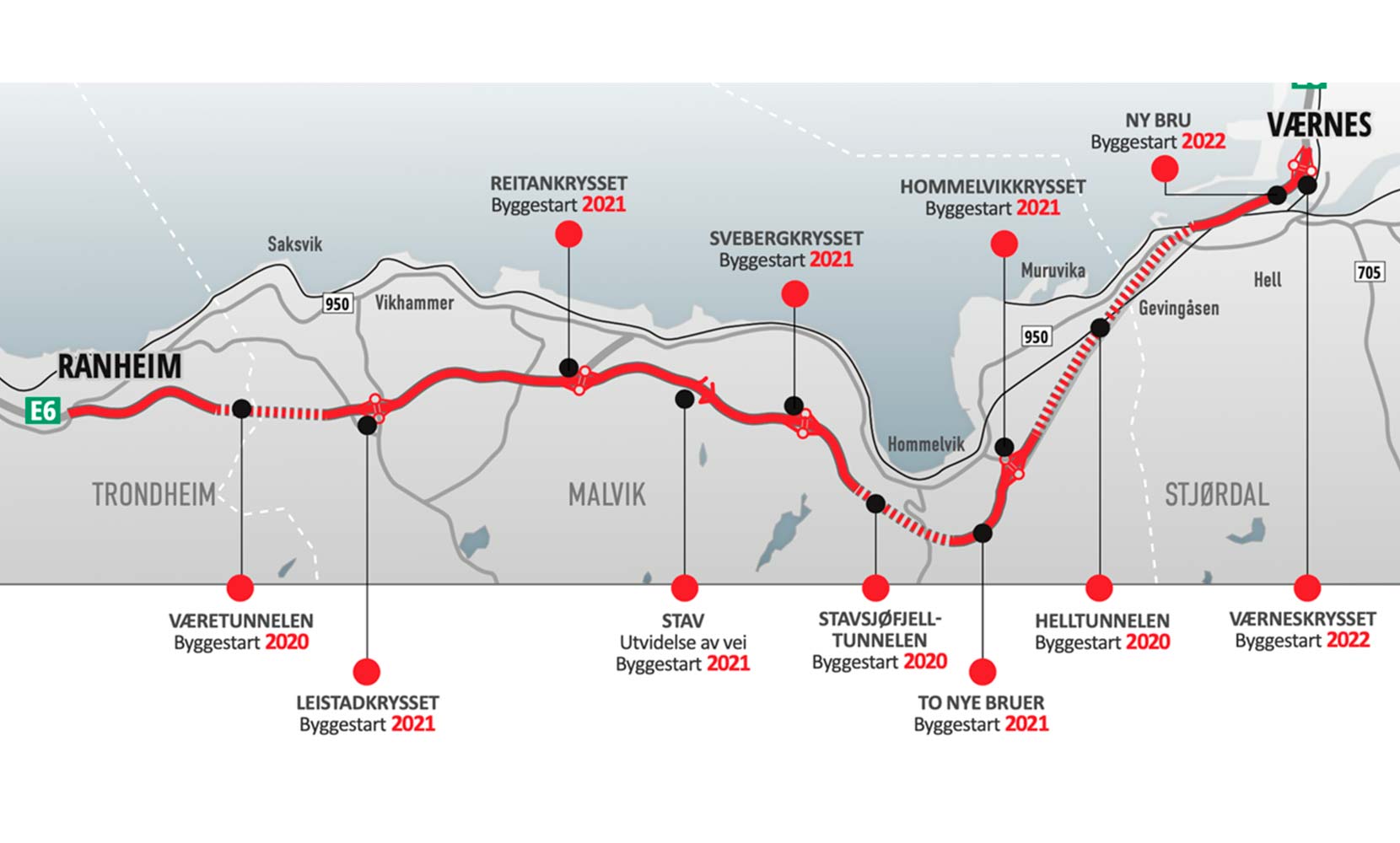 What we do for the environment locally

As gently as possible

ACCIONA aims to build the new E6 as gently as possible. We do what we can to ensure that people and the environment along the road are exposed to as little inconvenience and strain as possible.

In addition to following laws and guidelines, we have set ourselves a clear goal of minimizing the inconvenience to people and the environment along the way.

We follow the Ministry of Climate and the Environment's guidelines for the treatment of noise in spatial planning (T-1442). If the calculated noise value is higher than the recommended limits, we implement noise reduction measures both for the construction phase and for the finished road. There may be noise barriers, ramparts, noise insulation of facades and noise reduction measures for patios. Sweco has performed noise calculations all the way for ACCIONA.

Like everyone else, road builders must follow the Neighborhood Act. It states that no one is allowed to do anything that causes unreasonable or unnecessary harm or inconvenience to neighbors.

What is unreasonable or unnecessary when building a road is not always easy to assess.

We work hard to set up the work as gently as possible. If someone still thinks that we do not act gently enough, we want them to contact us, then we will come and assess the relationship.

One of ACCIONA's five overall goals in the project E6 Ranheim — Værnes is to minimize inconveniences for all road user groups during the construction and operation period. We plan the work so that periods of closure and detour will be as short as possible. Even more important is that it should be safe for all road users while the construction work is in progress, not least for the children to and from school. We inform Vegtrafikksentralen and Nye Veier about all incidents that affect traffic. Then it is Vegtrafikksentralen that notifies road users. Nye Veier offers news alerts on e-mail, Facebook, Twitter and Nye Veier's websites. You can receive notification of explosions by SMS. Detours and changes in traffic patterns are well signposted along the road.

What we do for the environment locally

ACCIONA is making an efford to minimize the enironmental impact generated by the E6 Ranheim-Værnes project by impleting measures and always following profesional advice.

Here are some examples of how we constantly work to safeguard nature and the environment in the local area:

HOW TO REPORT BUILDING DAMAGE

If you discover damage that you believe is caused by our construction activity, e-mail us or a send a letter to ACCIONA xxxxxx. Give a brief description of the damage and when it was discovered. Feel free to document with photos. We will contact you and make an initial assessment of the damage. In the event of damage to homes that may be related to blasting work, we will investigate whether the home has been mapped earlier and what may have been registered by previous damage. We will also examine the vibration measurements and any blasting report.

From XX:XX to XX:XX

Newsletter from ACCIONA about the project

Use the registration form on the page to sign up for the notification service. By registering for an SMS notification, you will receive an SMS in advance of each blast that is carried out in the given area where you have registered for notification.

Stay up to date in the construction phase, so that you have a safe and predictable journey.

Find more information about the project in Nye Veiers's webpage